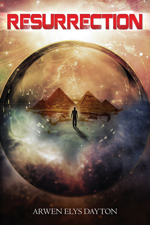 Five thousand years ago, the Kinley built a ship capable of traveling faster than light. It carried a group of scientists to the distant planet Earth with a single mission: peaceful observation. But
when the ship was destroyed, the crew found themselves stranded in Egypt during the reign of the pharaohs. With no way home, they buried their technology deep beneath the desert and sent a last desperate message into the stars.

Today the Kinley homeworld hovers on the brink of extinction. An enemy that nearly obliterated their race has risen again‹now with the ability to destroy them for good. A lone Kinley soldier named Pruit is sent on a desperate mission: she must follow the ancient beacon back to Earth and recover the secrets to faster-than-light travel.

Spanning five millennia and vast reaches of space, Resurrection transports readers on an astonishing quest that will forever alter the fate of two extraordinary worlds.