The Dark Side of Author Activism

If you’ve been living under a social media rock and haven’t heard of the LendInk incident, here’s a brief rundown.

LendInk was a website that facilitated Kindle ebook lending, matching would-be ebook borrowers with ebook owners. All of this was perfectly legal, involving legitimately purchased ebooks, lending options provided by Amazon, and lending terms set by publishers (whether the book was self- or traditionally published). Unfortunately, some authors, finding their books listed on LendInk, jumped to the conclusion that it was a pirate site. They mounted an anti-LendInk social media campaign and deluged LendInk’s hosting service with DMCA notices. The result: a legitimate website was shut down.

There’s been a lot of coverage of this mess, some of it pretty hyperbolic (such as this blogger, who urges revenge on the presumed instigators, apparently blithely unaware of the irony of drumming up a lynch mob in judgment on another lynch mob). One of the more objective overviews that I’ve seen comes from Porter Anderson, in his Writing on the Ether column; his article also includes links to several interesting analyses of the incident and its implications.

Two things really stand out for me here. First, the ignorance of some of the authors involved, who’d used Amazon to publish their books but apparently didn’t realize that Amazon allows ebook lending. Second, the lack of careful investigation, which caused some people to assume that a legitimate service was a pirate site, and others to perpetuate the meme without bothering to verify it.

Ignorance and lack of investigation are also what lead writers into the arms of scammers. I encounter this every day in my Writer Beware correspondence: writers who don’t take the time to learn anything about publishing before trying to get published, who neglect to research agents and publishers before approaching them, who swallow various Internet-promulgated myths about publishing and self-publishing and as a result have completely unrealistic views of either or both. Usually it’s only themselves these writers harm and disappoint–but in the case of LendInk, this ignorance and carelessness, amplified by the lightning speed and viral nature of the Internet, did harm to others.

Author activism can also, of course, be a force for good. Recently, author activism exposed and marshaled action against a real pirate site, The Ultimate Ebook Library (which unfortunately is proving a good deal harder to kill than LendInk was). But the line between a righteous mob and a lynch mob is a thin one–not a new insight, but in the wake of LendInk it bothers me a lot more than it did before.

A friend of mine feels that piracy is such a threat, and author activism is so important in combating it, that incidents like LendInk aren’t an unreasonable price to pay. He also points out that it’s symptomatic of the bias of the Internet that the taking down of LendInk created outrage, while many people simply throw up their hands in the face of real piracy, figuring that there’s no way of stopping it and that they just have to learn to deal.

I understand my friend’s position. But I also agree with Porter Anderson, who points out the danger of wielding powerful weapons without adequate knowledge. “[D]igital empowerment,” he says, “can require new efforts in training, and new obligations of learning on the parts of all players.”

Which brings me to…

“The virus of mediocre and received ideas coursing through the collective brains of the book world.”

That’s a direct quote from Jeff Vandermeer’s fantastic blog post entitled Dreaming Well: Does the Future of Publishing Need More Imagination? In it, he takes issue with the pundits and self-proclaimed trailblazers who want us to believe they can predict the future of publishing, and/or define the new nature of authorship in a radically changing environment. What value, he asks, does any of this prognostication actually have?

I feel passionately that some of the information we are getting is increasingly wrong and motivated by selfishness and, yes, to some degree, a form of hyperbolic illogic. We are so hung up on predicting the next big thing, on getting in on the next gold rush when it comes to ways for authors to promote themselves and market their work that we often seem to be active participants in our own destruction….

The problem right now really isn’t the “tyranny” of big NYC commercial publishers or an Amazon monopoly. The problem is the virus of mediocre and received ideas coursing through the collective brains of the book world, infecting too many of its writers, commentators, reviewers. It’s a kind of fundamentalism at its heart, and we want to believe in it because it’s easy to do so.

We want to believe in it also, I think, because it represents a form of wish-fulfillment, on both sides of the issue. Many pundits, commentators, and evangelists’ predictions reflect not just the future they think may happen, but the future they want to happen.

What are some of these “mediocre and received ideas?” Paraphrasing Jeff: copyright is (or should be) dead and no one should have to pay for content. Agents are evil monsters who will suck you dry and stomp on your drained corpse. Publishing house editors don’t edit, so who needs publishers? (Jeff didn’t mention this, but a related meme is “publishing houses don’t market, so who needs publishers?”). Traditional publishing is [pick one] dead/evil/going to kill your career, so self-publishing is the One True Path. Get out there RIGHT THIS MINUTE and establish a social media presence, because every author needs a platform, even if they’re not actually an author yet.

These ideas aren’t just mistaken, according to Jeff; they’re actually dangerous. He concludes (I’m quoting so much because what he says resonates so strongly with me):

Taken together, advocates for the wholesale dismantling of the current system and, to a lesser extent (lesser because it’s not as prevalent) other advocates who too frequently defend the inadequacies of the current system represent the biggest threat to the majority of writers. By spreading a more-or-less ideological virus that is then repeated by ever-growing numbers of people who do not stop to analyze what they then put out there as gospel, a self-fulfilling prophecy occurs that may do long-term damage to the ability of writers to survive in this new age of publishing.

Just as with author mobs on Twitter, the unthinking, uncritical propagation of myths, half-truths, and ideological bombast about publishing has the potential to do tremendous damage.

We live in highly polarized times. That’s as true in publishing as it is in politics–and, I think, as reflective of the fear of a future that, as much as we would like it to be clear and certain, offers no assurances but the certainty of upheaval. In such a situation, it’s more essential than ever to think critically, investigate carefully, and act deliberately. And to be wary of received wisdom, or anything masquerading as such. 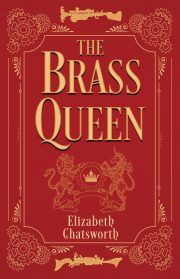 In a steam-powered world, a fiery British aristocrat and an inept US spy search for a stolen invisibility serum that could spark a global war.