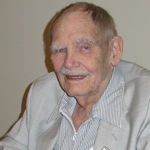 Polymath and former SFWA President Frederik Pohl (b.1919) died on September 2 after entering the hospital in respiratory distress earlier in the day.  Pohl joined science fiction fandom in the 1930s and quickly became an integral part of the New York science fiction scene.  He was denied entry to the first Worldcon in 1939 as part of the “Exclusion Act.”  By that time, he had begun to publish, with his poem “Elegy to a Dead Planet: Luna,” appearing in 1937 and his first story, the collaboration with C.M. Kornbluth “Before the Universe” in 1940 (as S.D. Gottesman, one of several pseudonyms Pohl used, either singularly or in collaboration).

As Pohl was building his career as an author, he also began agenting other authors’ works as well as taking on the editorial reins of several magazines over the years beginning with Astonishing Stories in 1940 and including Galaxy, If, International Science Fiction, and Super Science Stories. Pohl edited several anthologies such as the 14th Nebula Collection as well as three volumes of the SFWA Grandmaster series, Star Science Fiction, and Shadow of Tomorrow. As an editor for Bantam, he published, among other things, Samuel Delany’sDhalgren and Joanna Russ’s The Female Man.

Despite the variety of his career, Pohl is best known as a science fiction author.  His novels include the Heechee Saga, which began with the Nebula, Campbell, Locus, and Hugo Award winning Gateway, The Day the Martians Came, Stopping at Slowyear, and Homegoing, among many others.  Throughout his career, he collaborated, writing several stories and novels with Kornbluth, such as The Space Merchants and Gladiator-at-Law, numerous times with Jack Williamson, and also with Thomas T. Thomas.  In 2008, he was the “junior partner” in a collaboration with Sir Arthur C. Clarke.  Pohl’s published his last novel, All the Lives He Led in 2011 and continued to write up until his death.

Pohl was a prolific non-fiction author, serving as the Encyclopedia Britannica’s expert of Tiberius, writing about film, science, politics, and ecology.  His autobiography, The Way the Future Was provides an intimate look at the origins of science fiction fandom and business.  More recently, Pohl has been blogging additional insights into science fiction on his website, entitled The Way the Future Blogs.

Pohl won back-to-back Nebulas for Best Novel in 1977 and 1978 for Man Plus and Gateway.

Including Gateway, Pohl won a total of seven Hugo Awards, including his most recent in 2010 for Best Fan Writer. He was named a Grand Master by SFWA in 1993 and was inducted into the Science Fiction Hall of Fame in 1998.

Steven Gould, SFWA President, had this to say:

“A former SFWA President (1974-76) and Damon Knight Memorial Grand Master,  Frederick Pohl’s career spanned 74 years from his first publication in 1937 to his most recent book, All the Lives He Led in 2011. He was a stellar editor as well, in both magazines and books and acquired groundbreaking works like Joanna Russ’s The Female Man and Samuel R. Delany’s Dhalgren. My personal favorite was his book Man Plus. I met him only twice but both meetings are etched in my memory and I am very sad tonight.”