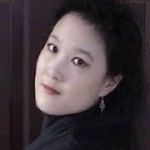 Nebula Award winning author  Eugie Foster (b.1971) died on September 27 from respiratory failture. Foster’s work was collected in Returning My Sister’s Face: And Other Far Eastern Tales of Whimsy and Malice. She won the 2009 Nebula Award for “Sinner, Baker, Fabulist, Priest; Red Mask, Black Mask, Gentleman, Beast,” which was also nominated for the Hugo and BSFA Award. She had served as managing editor for Tangent Online and The Fix, both short story review sites, as well as editor of The Daily Dragon, the Dragoncon online newsletter and served as a director for the convention. Foster also wrote “Writing for Young Readers,” a monthly column for children’s literature and young adult literature writers. Foster began publishing fiction in 2002 with the story “Second Daughter,” in Leading Edge.

I would just add our hearts go out to her friends and family. She was taken untimely young.
~Steven Gould, President
Science Fiction and Fantasy Writers of America