In How to Write Science Fiction and Fantasy, Orson Scott Card discusses developing the evolution of the distinct biology of an alien species, and how that imagined evolutionary process informs both an individual’s thoughts and actions and the aliens’ culture.

I’ve written a fair few aliens since reading it, always thinking about that advice, but with an added aspect: stealing blatantly from Mother Nature.

My aliens are based on science we currently understand. The starting point is often an earth creature. The diversity of Earth’s species is astonishing. There are, to my mind, some truly strange creatures out there.

Vampire squid: in a story in a SFComet story.

Sea slug/slug: The Kanzai in my Dark Expanse stories including “Betrayal, Clear as Kanzai Glass.”

Conan bacterium: in the Nature’s Future’s story “Glass Future” (a post-human rather than an alien).

Coyote and a Locust/Hamster mix: The Kyoti and Logorasch races in my upcoming Dark Expanse novel: As Good As Bad Can Get. 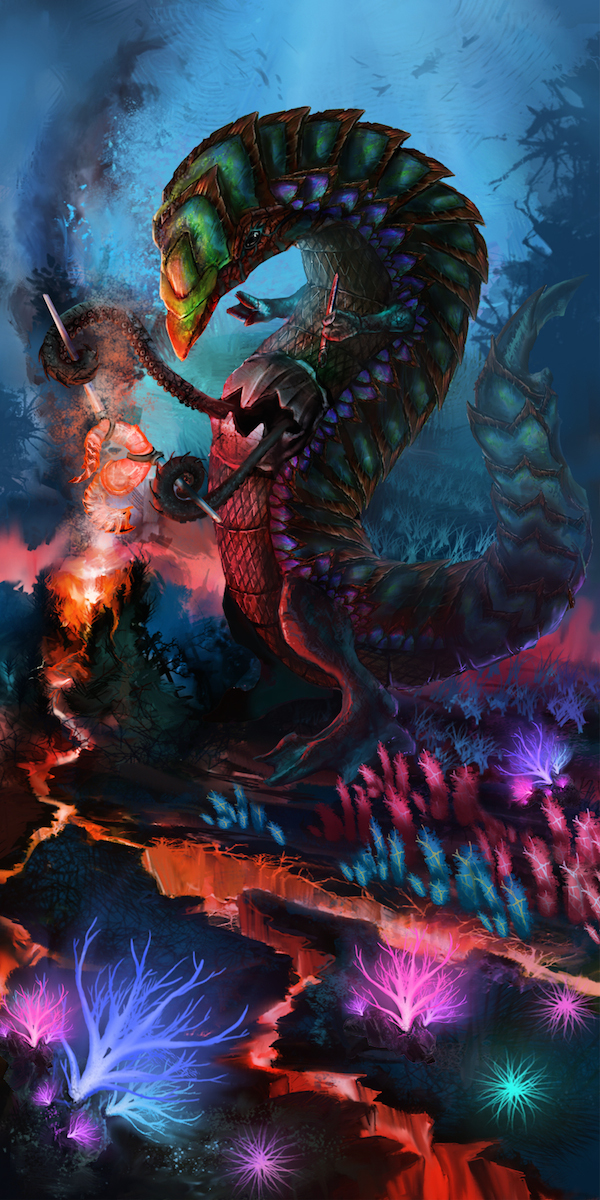 I use Wikipedia as a research resource. I know some writers are critical of Wikipedia as a tool, but I disagree. I find it gives plenty of detail and there are always links to other resources if you need to expand.

First you need to select your base creature(s).

You could start with the alien, at which point you’re free rein to plunder the Earth. For example, I’ve always wanted to create aliens riffing off the reproductive biology of fungi, which is very different to mammalian reproductive biology. (By the way, that doesn’t make me strange or anything.)

Or have may have story in mind and need a creature to fit. The Kanzai are an alien race written in the shared world of the SF RPG game The Dark Expanse. So, there were already a few known facts about them: they were slug-like, they were semi-aquatic; they were reported to have mind-powers. I quickly found the story I wanted to write: a colonization story, charting the fall of the original Kanzai civilisation and the downfall of my main character. So I went straight to the slug and sea slug section of Wikipedia.

I like to copy and paste Wikipedia into my document and delete the text as I read. For the Kanzai I downloaded 60 thousand words on slugs, sea slugs and on specific species of sea slug that caught my eye. (I know that’s a lot. It’s my process. I bet your mileage varies.)

I read through the text, looking for details that will work for my alien. I did this concurrently while writing the story. So that details of Kanzai biology and culture informed the story, and needs of the plot inform the details I chose.

Real life Details I Used for the Kanzai

Some species of sea slug have feathery external gills. The Kanzai are amphibious, so I made these delicate gills retractable on land, and gave them lungs. Lungs are useful if you want to speak to species without mind powers.

Slugs have a moist skin, for extended periods out of water the Kanzai use bathing pools.

Slugs and other gastropods undergo an incredible process in their development, rotating their internal organs 180 degrees. In the Kanzai this organ rotation occurs at adolescence and is linked to the emergence of their mind powers.

Sea Slugs lay a lot of eggs, an evolutionary advantage when eggs and young are consumed by predators. The Kanzai also lay a lot of eggs, but when they developed mind powers they exterminated their predators. The continual influx of youngsters became a species disadvantage as the Kanzai threatened to consume their world’s resources. Kanazi society developed a process of culling 90% of their adolescents. This is an example of cultural world building that comes directly from Kanzai biology and their imagined evolutionary history.

It doesn’t have to be a multicellular creature. I copied the multiple genome from the charmingly nick named Conan bacteria, to give post-humans a similar tolerance to radiation.

If your aliens evolved on a non-Earth-like world, Mother Nature can still help you. Extremophiles are a group of creatures living in what we would be consider a hostile environment.

If I’m writing from the point of view of an alien, I try to empathise with that culture. (Your mileage may vary on this one.)

To a human the idea of killing off 90% of our children when they enter adolescence is outrageous unconscionable. But to the Kanzai it’s a normal process, part of their belief system. And who’s to say who’s right. I’m not Kanzai. (But that’s not to say that outsider characters can’t comment on those practices, and there’s always the odd troublemaker who doesn’t like the status quo.)

When creating an alien species you’ll need to pick and choose the details you want to explore. You don’t need to go into every aspect of their biology, because living organisms are incredible complex a complete picture at microscopic and macroscopic detail could expand to fill textbooks of alien physiology. I try to use details that tie into the themes of my story, and/or give colour to the story.

You may find fascinating detail that just don’t fit the story you want to tell. During my research I learnt of the penis fencing habits of flatworms.  I didn’t make this up. I considered it, but, sadly, I decided not to include that detail to the Kanzai.

I’m sure that there’s more than one way to write an alien. But this is mine. Mother Nature has written a lot of potential stories into the bodies of the creatures, plants and other living creatures that share our world. It’s one of my favourite parts of being a writer, creating imagined creatures from the strangeness of reality.

Deborah Walker grew up in the most English town in the country, but she soon high-tailed it down to London, where she now lives with her partner, Chris, and her two young children. Find Deborah in the British Museum trawling the past for future inspiration or on her blog. Her stories have appeared in Nature’s Futures, Cosmos, Daily Science Fiction and The Year’s Best SF 18 and have been translated into a dozen languages