I set out to write science fiction and fantasy quite a number of years after having received one of the best gifts of my life. In fact, so many years had elapsed that I no longer thought much about this marvelous gift. No, I don’t mean the ability to create stories, but rather a more fundamental gift, which turned out to be the first of several that have come to me courtesy of fantasy and science fiction. But already I’m getting ahead of myself, so let me begin again.

Soon after sitting down to capture on paper the characters, conversations, and non-existent worlds whirling through my mind, I began to get intimations that creating fiction can be a hard business built on considerable labor for little return. With effort and persistence quite beyond the point where a less stubborn person would turn to a more rewarding endeavor, there did come a point—a seemingly miraculous one at that—where I learned that one of my stories had been accepted for publication. Little did I know that this particular story wouldn’t see print until six years after I sold it, and that turned out to be several years after I’d had other stories published. At any rate, I remember the sheer excitement of holding in my hands the anthology containing my first published story, and of opening the book to find my name (spelled correctly!) together with the title listed in the table of contents. Better yet, there was my story on the page indicated, with my name in out-sized letters. My first publication was way more than enough to keep me filling pages with imaginary people and events for a good while.

And so I wrote through the solitude of the hours and days in which the majority of the conversations I heard took place between people who didn’t exist, people who lived in imaginary lands, people who struggled to overcome all manner of problems large and small that also didn’t exist. Inevitably, a moment came to me, as it does to nearly all the authors I’ve talked to about writing, when the thrill of seeing my work in print and on an electronic screen, no matter how marvelously illustrated, was no longer enough to propel me through what looked to be a discouraging ocean of indifference populated by far too many sea beasts of rejection, ever ready to bite and slash and snark. 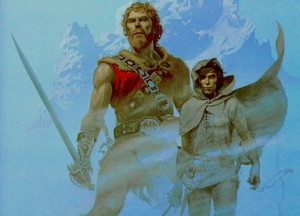 Thankfully, I had a secret weapon to supplement raw determination. I could draw upon a huge gift that my Mom had given to me as a child. Actually, she gave me two gifts. First, my mother taught me to read. Second, she surrounded me with all manner of wondrous, fantastical tales. While growing up, I had devoured Greek, Roman and Norse myths before branching out to Dr. Seuss, Alice in Wonderland, The Wonderful Wizard of Oz. I visited as many exotic lands as a kid who lived in an uneventful country village could find. I spent endless hours with fascinating new people, gravitating to the ones who weren’t human. Naturally, there came a time when I moved on to the stories it seemed like everyone of my generation read: Chronicles of Narnia, The Lord of the Rings, The Martian Chronicles, A Wizard of Earthsea, Sherlock Holmes mysteries, Fafhrd and the Gray Mouser, on and on. The gift of being able to sink into new books, fresh characters, and far-flung worlds never grew stale, never lost its enchantment. As time goes by, I only discover more and more marvelous tales told by remarkable writers. For it is gifted writers who continue to inspire me, who stir up my own urges to return to the keyboard once more, who drive me back to listening and watching those characters in my head as they struggle to deal with their predicaments, which are no less my own and everyone else’s too.

And yet, notwithstanding the renewed burst of energy and enthusiasm for writing, there still comes a point where my fingers falter. Sometimes the characters wander off into complacency or the plot lurches into predictability. I sit and wonder why I am doing this. That’s when it’s time to take out and unwrap another gift, one which writing fantasy and science fiction has given me. I summon up the looks on the faces of those in the audience when I do readings—their expressions as they sink into the characters, their growing worry as they apprehend mounting threats to those characters coupled with the closing off of options that the characters might take to deal with their problems. Above all, I watch my listeners’ growing need to find out how it all comes out. Their responses to the ending can be fascinating. Once, I received the gift of being berated by a distraught woman whose favorite character didn’t survived the final encounter.

Because I’ve always reveled in being swept away to fabulous worlds, I cherish the gift of being able to transport readers to distant lands, whether real or imaginary. My Mom is the reason why I treasure this gift the most. One day, a few years ago, I had been struggling to write a time travel story and eventually decided that my mother would make a terrific main character. Problem was that, though she had an adventurous streak, she was terrified of airplanes and had never flown in one. So I called her up and asked her about time travel. Hypothetically, if she were to win an all-expenses-paid trip for two to the Cretaceous—the land of the dinosaurs—would she go? “Oh yes,” she said without a bit of hesitation. “It’s some place I’ve never been.” That was the moment I knew I absolutely had to write “Mom and the Ankylosaur.” Alas, she passed away not long after the story was published. But I did have the joy of doing a reading of the story at her local library; she and her book-club friends all turned out. Of all my memories of her throughout the years—and she lived to be eighty—my most treasured one is the look on her face that evening as she listened to her own adventure in the Mesozoic.

Rosemary Claire Smith writes science fiction and fantasy stories that showcase her interests in paleontology, folklore, mythology, genetic engineering, and aliens.  She draws on her background as a trowel-wielding archaeologist, reformed lawyer, and keen observer of contemporary society. Her other interests include ballroom dancing, abstract photography, foil fencing, and astronomy. Rosemary is a member of the Science Fiction Writers of America (SFWA), and a graduate of the Clarion Writers’ Workshop, as well as Taos Toolbox and Paradise Lost. Her fondness for writers’ workshops seems likely to continue.