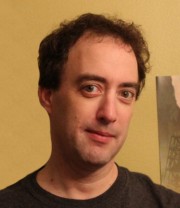 On behalf of the Science Fiction and Fantasy Writers of America, President Cat Rambo is pleased to announce that Neil Clarke has been hired as the new editor of the organization’s flagship magazine, The Bulletin.

After graduating from Drew University with a degree in Computer Science, he entered the educational technology field where he has worked at both the higher education and K-12 levels for the last twenty-seven years. In 2006, he launched Clarkesworld Magazine and Wyrm Publishing a year later.

Since 2014 he’s published a crowdfunded cyborg anthology, introduced Chinese translations as a regular feature in Clarkesworld, and launched Forever, a reprint magazine. His next anthology is The Best Science Fiction of the Year which will be published by Night Shade Books this June.

Neil has been acting as the interim editor for the SFWA Bulletin since John Klima’s departure this past summer. SFWA would also like to take this opportunity, to thank John for his work in the organization.

SFWA President, Cat Rambo adds, “I was overwhelmed by the talented applicants that applied for the position, and I’m happy that Neil was one of them. His editorial talents are rock-solid, he’s a congenial perfectionist, and I’m looking forward to having him as a more permanent part of the internal team. I expect great things for The Bulletin in 2016 and 2017.”

Members and non-members interested in writing for the Bulletin should send a short pitch on their proposed topic, along with a bio of relevant experience, to bulletin@sfwa.org. Our guidelines can be found here:  https://www.sfwa.org/sfwa-publications/the-bulletin/bulletin-submission-guidelines/

Questions, suggestions, and comments on the Bulletin may be directed to SFWA Bulletin Editor Neil Clarke at bulletin@sfwa.org, or Kate Baker at operations@sfwa.org.