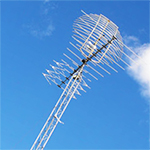 I was born in the future, the original one. In 1949, my father saw the future at a home-appliance trade show in Chicago and immediately opened a store selling the first television sets in downstate Illinois. My parents brought me home from the maternity ward and propped me in front of the TV. I nursed at my mother’s breast with my eyes fixed on Captain Video, bathed in the cathode glow of a top-of-the-line Phaeda powerful enough to pick up Havana Cuba from Peoria.

At first there weren’t many TV stations closer than Havana. Without an atmospheric inversion or pristine skies and a favorable wind, pulling in Chicago or St. Louis required an antenna atop a 40-foot tower. My father, having seen a future where this would be a standard feature of every American home, like a barbecue, built a factory to make antenna towers.

We had a tower of our own, so we kept up with a relentless TV schedule even in bad weather. One stormy night when I was three, a lightning bolt reached down and touched the antenna. I watched a bright blue pixie run along the linoleum cap in the kitchen and hop to the floor… then a deafening bang blew the paneling off the walls in the living room.

For a while, the future sizzled with electric possibilities. Everyone knew what the future looked like, because it was buzzing all around us. Cars would have phones in them, the phones would have color televisions in them, and the televisions would show cars that looked like rockets. The future just needed some fine-tuning, but it was already there, though we could see only a tiny fraction of it. Give us a few dots, and we’d connect them.

I wrote my first short story in the second grade. Sci-fi, naturally, and to tell the truth mostly plagiarized Heinlein, except for a few paragraphs where I was compelled to fill in the parts he’d skipped over, which I saw too vividly.

But as I got older, the future got old, too. It wore thin, it was taking forever. Eventually, the very old became new, at least to me. I read the racy parts of Ovid and Chaucer and, like everyone else, tried not to notice rockets.

By the time General Lemay proposed bombing someplace “back into the Stone Age,” it seemed redundant. We were already hairy creatures celebrating mud, singing poetry no one had ever seen in written form. Refugees from the future, we ate skinny vegetables and brown rice and magical cubes of sugar that came from someplace you didn’t want to know.

The future was twenty-five years old and not getting any younger when I was accepted to the Iowa Writers Workshop, the legendary (even then) graduate program for writers. Kurt Vonnegut, who had taught there, said, “Picture Harvard Law School if only one out of ten graduates actually becomes a lawyer.” Dedicated to the principle that the last thing you’d want happening in a classroom is teaching, the Workshop strove to be the opposite of academic, and more or less succeeded. Zipping their lips about how writing should be done, the staff was restricted to role-modeling the lifestyle of a writer: mostly competitive drinking, womanizing, wrestling, and snorting at weaklings; the Viking concept of higher education. Despite being a weakling myself, I did the best writing of my life.

And then in my second year, a last-minute substitute on the Workshop staff. A guy named Frank Conroy, author of only one book, and it wasn’t even fiction — who writes a memoir in their twenties? — who’d taught creative writing only once before, at (get this) M.I.T.

He specified we were to read the worksheets (someone’s delicate work-in-progress cast into the lion’s den) pen-in-hand, poised to mark any point in the text where we felt a “bump,” no matter how vague. In class, we went through the worksheets sentence-by-sentence, hashing-out whether some reader’s bump was an idiosyncratic misreading or an actual problem. They always turned out to be problems. If a reader misreads, Conroy taught us, it’s always the writer’s fault.

It was madness. The classes went on until the janitor came to turn out the lights, and we never seemed to get anywhere. This wasn’t a course about writing, it was about readers and how infinitely bone-headed they could be. There were moments of sour insight. A student nobody could stand said, “Only a halfwit would read it that way, and I’m certainly not a halfwit.” To which another student responded, “Let’s discuss that for a moment.”

Conroy was open to any detour, no matter how exasperating. He entertained the most ludicrous arguments, but in the end it was his own conclusion that was definitive — a clear violation of the Workshop creed as I understood it — and then we’d abruptly move on to the next outrage.

One Tuesday afternoon, Conroy delighted over an obscure flaw only one reader had detected. Conroy explained the problem — a serious one, apparently — with a principle he’d learned from his own mentor: “Don’t say on page six that the character took off his hat if you didn’t say on page one that he was wearing a hat.” As we pondered the obviousness of another dusty writer’s tip, Conroy asked us, “Why is this?”

We came up with lots of good theories, but of course they were all wrong. Conroy finally supplied the true explanation:

By page six, the reader has already formed his or her picture of the character, built partly from what the writer supplies but also from the reader’s own logical expectations and actively engaged imagination, wherever the narrative is silent about details. In the case of the hat, the default is that a person is not wearing a hat, so we know what 99 percent of readers have visualized. Introducing the hat too late requires the reader to rewind, delete, and re-process minutes or hours of fictional events she has been storing-up in memory, only this time with a hat present. And that’s a serious problem, because the dynamics of story-telling should always drive forward. You never want the reader to back up and start over, never want to break the forward momentum.

For the second time in my life, lightning struck. I had learned something of cataclysmic importance: It’s not just possible for a writer to know exactly what a reader is thinking, it’s necessary. Readers weren’t the shadowy aliens I’d always pictured, observers hiding their presence so my natural impulses wouldn’t be contaminated. Readers were knowable in the most intimate sense, participating in the invention, supplying what I didn’t. And there exists a system of mechanics for controlling the vectors of their thoughts.

In 1977, computers with punch cards were already a thing, so “delete” and “stored in memory” had vague significance. “Default” was more arcane, but that only left a deeper impression as I thought through its implications. Conroy — according to his memoir, a yo-yo champion and geometry whiz — had already stepped into a new future where the breakthrough writing I yearned for wasn’t just finger-painting with emotions and reckless, ego-centric cleverness. It was engineering, a precise assembly of language in which one misplaced comma could send the whole edifice askew. Get the dynamics right, and the slightest nudge could send the reader sailing across a void of unspecified details toward the precise station where the narrative captures her on the fly and pushes her onward. Get it wrong, and the reader will shoot off on her own tangent and be lost.

A new future started ticking for me that Tuesday, a swirling galaxy of millions of writers and readers who aren’t cut off and isolated, but always connected… entangled I would say today, because they’re part of the same rolling waveform, unlocalized in time or space, of a shared thought.

From that Tuesday in 1977, everything about the future has come as a discovery but not a surprise. All of humanity’s accumulated knowledge will be in one vast library, and it will fit on your eyelashes. We will all be writers, working in teams to weave epic stories, generating our memoirs from kindergarten onward, constantly documenting every peculiar thought for everyone else to share. The loneliness that eats at us every day will be ancient history.

The future is messy for now, mostly advertising and painted cardboard. But we know the 95 percent we can’t see yet is already there, waiting. 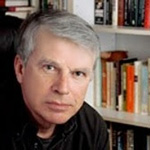