From Hector and Achilles to Luke Skywalker and Darth Vader, the heroic duel is a fiction staple. However, my special interest (and the topic of my unfinished book) is how to tell stories of nonviolent heroism. How do we tell gripping stories without the charge of heroic violence? Is it even possible to find nonviolent alternatives to the duel in compelling fiction? In fact, it is. I’ve identified three narrative strategies for subverting the duel, all of which have appeared in speculative fiction. These strategies are substitution, interruption, and nonresistance. A writer doesn’t need to quit violence cold turkey to make use of these strategies, but they at least provide alternative implements in the writer’s toolbox.

Duels with monsters are common in heroic literature. Beowulf fights three such duels over the course of his epic. Often, heroes seek to claim magical items from monsters. For example, in the Epic of Gilgamesh, Gilgamesh and Enkidu slay the forest guardian Humbaba so that they can harvest the sacred cedars. In the Abandoned Princess, a Korean legend, the heroine seeks mystical waters to heal her parents. Princess Bari doesn’t kill the monstrous guardian, though. Instead, she marries him. This is a subtle example of substitution. It only becomes apparent when we compare what happens in the Korean legend to what happens in other stories.

“The Reluctant Dragon” by Kenneth Grahame, on the other hand, offers an overt substitution. Saint George arrives in town to fight a duel with a dragon. To his embarrassment, he discovers that the dragon is a pacifist. Nonetheless, Saint George and the dragon need to satisfy social expectations, so they stage a fake fight. After the dragon throws the fight, Saint George gives the former a lecture on good behavior, then declares to the townsfolk that the dragon has been reformed. The staged fight is the direct substitute for a real fight.

A second strategy is interruption, which has its roots in the deus ex machina of ancient Greek drama. A god would descend to Earth, interrupt the conflict, and sort things out. We see a farcical echo of this in the nursery rhyme battle between Tweedledum and Tweedledee, which is interrupted by “a monstrous crow.” (This scene is famously enacted in Lewis Carroll’s Through the Looking Glass.) In this case, the crow assumes the role originally occupied by a deity.

The strategy of interruption, though, doesn’t always require a divine or semi-divine agent, as the television show Bridgerton demonstrates in its fourth episode. (Although the Bridgerton books are straightforward Regency romances, the television show introduces an alternate history element. Based on that technicality, it doubles as speculative fiction.) The heroine Daphne rides her horse into the middle of a duel between her elder brother and her love interest, the Duke of Hastings. After interrupting the duel in this fashion, she compels the latter to marry her. Here, an ostensibly less powerful figure (given the social status of women in the 18th century) still successfully disrupts the duel.

The final strategy for subverting heroic duels is nonresistance. Perhaps the best example of this comes from the Star Trek: Deep Space Nine episode “The House of Quark.” Through a comedy of errors, the Ferengi Quark becomes the head of a Klingon house, and the leader of a rival house challenges him to a duel. Quark accepts the challenge, but throws down his weapon at the start of the fight. He won’t allow his opponent or the watching crowd to pretend that this duel is anything but an execution. In this manner, Quark ensures that his adversary can only defeat him through dishonorable means—that is, by striking a much smaller, unarmed opponent.

Through this act, Quark upsets the ordinary duel dynamics. A traditional duel often isolates combatants from their social context. The barroom clears out. Hector and Achilles meet alone outside the walls of Troy. Boxers are physically roped off from the cheering crowd. Conversely, the strategy of nonresistance resituates the duel within its social context. When Quark’s opponent moves in for the kill, the Klingon chancellor intervenes—saving the Ferengi’s life and excommunicating his dishonorable adversary. Quark’s “victory through nonresistance” succeeds by pulling the social context back into the duel.

Having laid out these three strategies, I should acknowledge that all three can be handled either deftly or awkwardly. Of course, the same is also true for violent duels—and for literature in general. Nonetheless, knowing about these alternatives to the traditional duel gives a writer more options. Heroic violence becomes a narrative choice rather than the only available path. Although the challenge of keeping things fresh is perennial, I hope that experimenting with substitution, interruption, and nonresistance proves a valuable stimulus for your own creative writing. 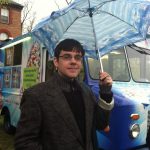 Gabriel Ertsgaard is interviews editor for The Peace Chronicle and copy editor for the literary journal Drifting Sands. He earned his Doctor of Letters from Drew University with a dissertation on environmental themes in a medieval legend. He previously taught English at universities in the United States and China, including a course he created on writing fairy tales. His criticism, poetry, and fairy tales have appeared in numerous print and digital publications.