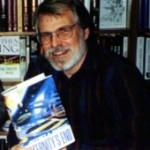 Jeffrey A. Carver is the author of sixteen science fiction novels, including
Sunborn, Battlestar Galactica, and the Nebula-nominated Eternity’s End.
Free ebooks at http://www.starrigger.net!

We are currently seeking an editor for the main blog on the SFWA homepage.  If you think you might be a good match for this position, please contact Mary Robinette Kowal.

We’re still under construction at the moment, so please don’t be surprised if some of the links don’t work. Eventually, this blog location will be filled by posts of general interest to authors of all experience levels

The BBC reports that novelist, essayist and short-story writer James Graham (JG) Ballard died on Sunday morning, April 19, 2009 following several years of illness. He was 78. Ballard was a British citizen who was born in Shanghai, China and educated at Cambridge University. He wrote 19 novels and dozens of short stories. His most […]

British New Wave author, Barrington John Bayley, passed away October 14, 2008 following a recent surgery for bowel cancer. He was 71. Bayley was born in Birmingham, England and lived in the UK. Although usually writing as Barrington J. Bayley he also wrote as Alan Aumbry and P. F. Woods. His first story was published […]

Algirdas Jonas Budrys, who wrote, reviewed and edited science fiction as Algis Budrys, passed away on Monday, June 9, 2008 following an extended illness. He was 77. He came to the United States from Lithuania at the age of 5 with his father, who was consul-general of the Lithuanian government. Known to countless fans and […]