Archive for the ‘SFWA Blog’ Category

One of the strangest schemes ever covered in this blog was a faux magazine startup called Laray Carr.

Operating out of Terrell, Texas, Laray Carr first came to my attention in August 2007 with a call for freelance writers, who could earn $50 per article for a minimum submission of 10 articles, paid on publication. The company purported to be planning to simultaneously launch 40 different lifestyle magazines focusing on food, fashion, music, home decor, and the like–yet with the launch date of September 20 only weeks away, was still scrambling to accumulate content. There was no website, and no information could be found on the company’s owner, Quincy Carr. Company staff seemed to know little about Laray Carr’s goals, finances, and business plans, and were unable to answer questions.

Red flags galore, in other words. Even so, many writers went ahead and submitted articles. But by September, with no payment forthcoming, writers began to get worried. Laray Carr became a hot topic on various freelancers’ websites.

Over September and into October, a bizarre story unfolded. Most of the articles were ultimately rejected, on flimsy grounds, with a strange kiss-off letter. Those that weren’t rejected were never paid for. Freelance editors, many of whom claimed to have done substantial work for the company, also weren’t paid. Web designers reported being asked to make multiple revisions to website templates, with the promise that payment would be forthcoming once the changes were complete–but it never was. Several websites appeared and disappeared, most incorporating grammatical and other errors. Supposedly custom-designed magazine covers proved to have (maybe) been stolen from other sources, or created using stock images. The company turned out to be doing business under several different names. The mysterious Quincy Carr was alleged to possibly have an arrest record.

Was Laray Carr investor bait? Did it plan to sell advertising and run? Or was it a genuine, if profoundly misguided and disastrously poorly planned, effort to establish a magazine empire? We’ll never know. By the end of October 2007, Laray Carr had vanished without a trace.

An anonymous tipster last week drew my attention to the possibility that Laray Carr had been resurrected as a company called Niche Age Media (over the weekend in which I wrote this post, the formerly-active website has turned into a placeholder, but here’s a cached version), run by someone named Quinn Rhodes. I normally take such tips with a hefty grain of salt. On investigation, however, the similarities proved striking.

– Focus. Both Laray Carr and Niche Age Media were/are lifestyle magazine companies, planning the simultaneous or near-simultaneous launch of multiple publications: 40 for Laray Carr, 45 for Niche Age (this info appears in the press release area of the Niche Age website). Laray Carr’s mission was to “connect to our readers’ most personal thoughts and ideas with an offering of magazines that speaks [sic] directly to them,” while Niche Age wants to “enrich lives and strengthen communities…our magazines make life richer, fuller, & complete.” Although Laray Carr’s magazines were supposed to be national publications, and Niche Age claims a more regional approach, the range of subjects (home decor, food, wine, music, gardening, sports, brides, etc.) is also similar.

– Location. Both Laray Carr and Niche Age were/are based in Terrell, Texas. What are the odds that two separate magazine companies, each planning to launch multiple lifestyle magazines, would spring from this one town?

– Stiffing of staff. Laray Carr’s M.O. was to hire staff on a contract basis, extract substantial amounts of work from them, and then never pay. Niche Age seems to be operating in the exact same way.

I’ve managed to locate and contact several Niche Age editors, all of whom tell me that they have done a lot of work for the company–but, despite the fact that their contracts stipulate monthly payment, have not yet received a penny. Their questions are met with excuses–funding problems, restructuring, the economy. Recently, they were told that the “taster” issues produced for the company’s launch were no good and couldn’t be used. Shades of Laray Carr’s writer kiss-off.

At least one of Niche Age’s web designers seems to be having the same kind of problem. See this complaint at a freelancers’ website, from a designer who claims to have been hired by Niche Age, asked for multiple changes and revisions even after the website went live, and then never paid. This is very much like the experiences reported by Laray Carr’s various web designers, such as this one or this one.

– Nonperformance. Laray Carr never got off the ground, despite elaborate promises and successively postponed launch dates. Niche Age also has failed to meet its launch dates. Per a May press release, its initial three magazines were supposed to go live by the end of May–but the website for these magazines (currently residing on the website of a web design service) is nonfunctional, and there’s no sign that the magazines exist. Also in May, another press release claimed that other company magazines would “debut in the next two months”–but there’s no sign of them, either. According to the editors I contacted, the magazines’ print date was pushed back to July 31–but it’s now August 3, and no magazines. Apart from several recent job postings, there’s no public sign that Niche Age Media is active at all.

– Websites. Laray Carr’s several websites were notable for poor writing and typos and other errors (you can get the flavor at this still-existing dummy version). Ditto for Niche Age, which among other things has an issue with the spelling of “its.” The design of the websites, which each feature scrolling magazine titles and an animated masthead with rotating shots of magazine covers, is also similar. As is the propensity of both companies’ websites to abruptly vanish and be replaced by page holders.

– And the clincher. Laray Carr was founded by Quincy Carr. Niche Age Media’s head honcho is Quinn Rhodes (this name doesn’t appear anywhere on Niche Age’s website, but Niche Age’s URL is registered to Rhodes. Suggestive, perhaps, but not conclusive. Ah, but guess what I have in my very own hands? One of Niche Age’s PDF media kits. Just a little click on the Document Properties menu item reveals that the author is…Quincy Carr.

(The media kit is quite something, by the way. It’s attractively-enough formatted, but it’s poorly written and contains numerous errors (the magazines, for instance, are supposed to “premier” in June), statistics apparently pulled from the air, a really lame tag phrase (“Live Better. Where You Live.”), and some truly unfortunate word and phrase choices, such as the “Eat Out the County” marketing program, or, under the heading of audience buying interests, “Wine Cellular Services.”)

So it seems my tipster was correct: Niche Age Media is Laray Carr, reborn. Another play for investors? Another exercise in doomed ambition? As before, I suspect we’ll never know. One thing, though, is clear: for Quincy Carr (to paraphrase Jacqueline Susann), once was not enough.

This website is intended to be a pivotal part of the Science fiction and Fantasy Writers of America’s mission to inform, promote, support, defend and advocate for writers.

Update: sfwa.org is in a transition state at the moment while we wait for some things to finish propagating through the internet. At the moment, if you go to sfwa.org you might get a parked page with advertising. This should change by the end of the day although for some people it may take up to 72 hours.

Our webmaster had a minor traffic accident today. No one was injured, but it’s made us get a slow start on the transfer. At the moment we are waiting for the domain name to finish transferring to our new registrar. Once that happens, we will change the DNS servers to point to the new site. It is unlikely that you will see any change between now and Sunday afternoon or evening.

Thank you for your patience.

Announcement: Moving the new site to sfwa.org on Saturday

On Saturday, August 1st, the website team will bring SFWA’s new website out of the extended beta-test we’ve been in. This post is intended to be an overview of what to expect during the transition. Because there is a lot of information to convey, we will be sending SFWA members four emails between now and Tuesday, August 4th, as different parts of the new system come online.

First off, definition: an exclusive means just what it sounds like. You are giving an agent the opportunity to consider your work exclusively and you are agreeing that you will not submit to another agent until you’ve heard “yea” or “nay” from that agent. Sometimes exclusives are open-ended, sometimes there’s a time period attached.

We’re still looking for help at the SFWA Table and Suite at Montreal and have autographing slots at the table. Please volunteer by signing up at the Volunteer website

Today the board of directors of SFWA unanimously voted to add Tor.com to the list of SFWA qualifying markets. Just celebrating its first year online, this extension of Tor Books features science-fiction and fantasy fiction as well as art, non-fiction, essays, and book reviews.

USA TODAY to include Amazon Kindle on best-seller list

McLean, Va. (July 22, 2009) – Beginning tomorrow USA TODAY’s Best-Selling Books List will include Amazon Kindle book sales in overall sales rankings. USA TODAY is the first major book list to include Kindle book sales and in doing so will provide a much more robust ranking for our bestseller list. This list will run in Thursday’s edition of USA TODAY and online at booklist.usatoday.com. 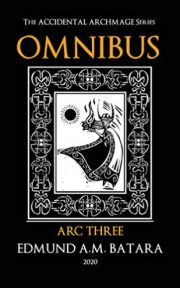 Collecting Books Five and Six of The Accidental Archmage Series.