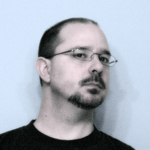 This June, John Scalzi stepped down as SFWA President. He took office in 2010—twelve years after beginning his wildly successful blog, Whatever, and five years after he published his first novel. Following Old Man’s War, he published seven more novels, including New York Times bestsellers The Last Colony in 2008, Fuzzy Nation in 2011 and Redshirts in 2012 (those last two while serving as President). His work has won the Hugo and Campbell awards here in the US, and the Seiun, the Kurd Lasswitz, and the Geffen awards overseas.

SFWA member Carrie Cuinn ventured into Scalzi’s lair (aka, the Internet) and conducted the following interview.

Carrie Cuinn: When discussing the 2008 presidential election, you said, “Whether SFWA wants to admit it to itself or not, thanks to the massive public debacles of the last year, its reputation is in the dirt, and not just with people already active in the field. I go to a fair number of science fiction conventions, you know; I’ve met a lot of the neo-pros and the under-30 writers who are (or should be) SWFA’s natural new membership. They see SFWA as either useless, or actively hostile to them.” (Feb 18, 2008, Whatever blog)

Now that you have completed your service as President, what do you think SFWA’s reputation is? In what ways can the new President continue to repair the organization’s relationship with the “neo-pros” – both new members and potential ones?

John Scalzi: I think SFWA’s reputation is better with the outside world and neo-pros than it was in 2008, although I would want to be clear that the reason for that is not all (or even majority) due to me – we’ve had very good boards in the time since, which has focused on member service and on making sure that the organization was doing what it was supposed to do – advocating for writers in the marketplace. The best argument SFWA can make to a potential membership is simply to do its job. If the next president and board do that – and I don’t have any doubt they will – then SFWA’s reputation will continue to rise.

CC: You’ve held the position of President for three terms (longer than anyone else), and you didn’t lose this year – you chose to step down. What do you think contributed to your success in this office?

JS: That no one ran against me!

Beyond that, however, I think the success I’ve had comes down to two important things. The first is that all three years I had a great Board of Directors: People who were smart, committed and capable. The president’s job (to my mind) is to lead discussion, direct traffic and delegate responsibility – all of which are dependent on having good people to work with. The president is the public face of the organization and so when things go well (or at least don’t go wrong) credit is often accrued to him or her. But the fact is that it’s the whole board to whom credit must go, and be shared with.

The second reason is as much as possible I tried to make this a “no drama” presidency. I have a very public – and dramatic – persona online, and I suspect there may have been members who when I started out were concerned that I would transfer that persona into the presidency. I tried to avoid doing that. The Presidency of SFWA is not about personal aggrandizement, it’s about working for the membership. So as much as possible, I kept my nose to grindstone and worked with the board.

This is not to say that there weren’t dramatic moments during my presidency; I can think of several. But by and large they weren’t caused by me or the organization, and that’s something I’m happy about. Much of my and the organization’s success during my tenure is simply not screwing up in public.

CC: Before you took office, you talked about needing to balance being “a working writer” and also “a president of an organization of writers.” How did you do? Do you have any advice for the rest of us trying to balance a writing life with work, family, volunteering, or other drains on our time?

JS: Scheduling helps, as well as having a routine. But the fact of the matter is even with the best of intentions and the best of schedules and routines, it can be tough – there have been times where I wish the day were longer (or at least that I could work faster) to balance everything. And at the end of the day, of course, there was more I wish I could have done.

That said, I think it’s important to note that I published novels and other fiction every year I was president, because one of the knocks on the SFWA presidency has been that it takes a year of your professional life from you. Well, it doesn’t have to, if you make the concerted effort to make that balance (and, I would also add, if you have a competent and committed board, as I have had). If you can show it’s possible, I think it results in good people more inclined to volunteer for the gig, not to mention other board and organization positions.

CC: Now that you’re no longer speaking as the President, will you return to posting your opinions about current SFWA issues on Whatever?

JS: Oh, probably in the long run, although my current immediate plan at the moment is not to do a lot of that. The new President will be burdened (if that’s the correct word) with the implications of policies that were started in my administration, and it would not be either politic or helpful to be out there on the sidelines, picking apart what he and the board are doing.

Indeed, although I will make myself privately available to the new president whenever he wants to pick my brain about SFWA-related things, I think the best thing I can do for the new president and board is just to step away from public SFWA life for a bit and give them time and space to do their own thing. The best kind of ex-president is the one who’s not there, you know?

CC: Is there anything you wished you had accomplished as President but didn’t get to?

JS: Yes, although I don’t think it will do any good to say what they were. I will say I do think I’ve learned a lot about myself as an executive. What I’ve mostly learned is that I think I’m good at a number of executive tasks in a general sense, but that I have significant competency holes. When these holes are filled by complementary competencies possessed by other board members or volunteers, that’s not a problem. When they’re not, it is.

My own fall-downs in this area are why I would grade myself as a good but not great president for SFWA. Hopefully the new guy will be great.

CC: What was the best part of holding this office for as long as you did? The worst?

JS: I don’t know if this qualifies as “worst” in the sense of how horrible it is objectively, but it’s the thing that exasperated me the most: You do have to deal with people who want to tell you how to do the job or how to deal with a particular task or problem, because from their point of view it should be simple, when in reality it actually is complicated if you want that thing to resolve successfully (“successfully” in this case meaning “to the best result for the largest number of affected members”).

I am sympathetic to the idea that everyone sees themselves as Alexander, slicing through the Gordian knot, because Lord knows I have been guilty of that myself on a frequent basis. But the fact is sometimes the knot will not be cut and you have to sit there and unravel the damn thing, which takes time and effort; meanwhile people are unhappy and will not necessarily be totally satisfied when the whole untangled issue is laid out before them.

As for the best things: Well, I’m not gonna lie, it’s awesome to have picked Grand Masters. It’s fun to go to Nebula Weekend and know (although many other people actually made it happen, and deserve the credit for it) that it’s your party. There’s a feeling of accomplishment when you argue and debate with the board and come up with a solution for the members that makes their lives easier or better. And it’s very nice when members come up and tell me that they’ve appreciated me being president, or that they’ve joined SFWA because they see the good that that organization’s been doing.

I’ll miss all of that, but all of that is the reason I have to leave – it would be selfish to keep all of that to myself. Time for someone else to have that experience, and for the organization to benefit from the new thoughts and perspectives from a different president. I wish him and SFWA well.