I did not invent moss-trolls. They belong to Marissa Lingen

“The advantage of writing urban fantasy or world-crossing fantasy is that when the sea serpent has eyes the color of NyQuil, you can say so rather than spending time trying to come up with settlement-era Icelandic-ish equivalent having something to do with moss-troll ichor. Because then you’re stuck with moss-trolls, and also they have ichor, and you can pretty well guarantee that’s going to come back and bite you in the butt in another book or two: you didn’t have to deal with moss-trolls *before*, and now you do, and it’s a lot of bother just for a color analogy.”

But I’ve thought a lot about the problem that Lingen identifies; it’s one that a writer of secondary-world fiction encounters frequently. (I’m using the term “secondary-world fiction” rather than “fantasy” because science fiction set far enough in the future has the same issue, though the variables of the equation are a little different.) You can’t, for instance, say something is as basic as the missionary position in a world without missionaries. What about saying something is as swift and sharp as a guillotine’s blade? Well, did Dr. Joseph-Ignace Guillotin exist in this world? You will find moss-trolls again and again whenever you start describing the imaginary people, places and things of your imaginary world. Because one of the first ways we try to describe something is to say what it’s like.

Now consider the Moss-Troll Problem and what it says about secondary-world fiction. We’ve declared one of the fundamental gestures of literature out of bounds. We make this same gesture–this thing is like this other thing–but we have denied ourselves the frame of reference in common with the reader. So when we do this, when we say the sea serpent’s eyes are the color of moss-troll ichor, we have to somehow convey both sides of the analogy, rather than relying on one half to explain the other. Secondary-world fiction therefore takes self-referentiality and makes it into a defining gesture of the genre, a form of intensely compressed poetry. This is the place where world-building is trying to get you, where you have a secondary world that’s rich enough and deep enough that it can generate its own frame of reference, that you can reinvent the wheel using unobtanium and dragons’ bones.

The moss-trolls make writing secondary-world fiction hard. But they also make it an endless joy. 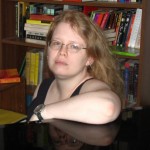 Sarah Monette grew up in Oak Ridge, Tennessee, one of the three secret cities of the Manhattan Project, and now lives in a 104-year-old house in the Upper Midwest with a great many books, four cats, one husband, and one albino bristlenose plecostomus. Her Ph.D. diploma (English Literature, 2004) hangs in the kitchen. Her short stories have appeared in Strange Horizons, Weird Tales, and Lady Churchill’s Rosebud Wristlet, among other venues, and have been reprinted in several Year’s Best anthologies; a short story collection, The Bone Key, was published by Prime Books in 2007. Her first four novels (Melusine, The Virtu, The Mirador, Corambis) were published by Ace Books. She will publish her next novel, The Goblin Emperor, with Tor Books, writing as Katherine Addison. She has also written one novel, A Companion to Wolves, and three short stories with Elizabeth Bear, and hopes to write more. Visit her online at www.sarahmonette.com.