I’m writing a military sci-fi novel, and I’ve run into a medical snag.

I know (or like to think) that there are certain toxins which can rob the blood’s ability to transport oxygen. Would you happen to know what the emergency treatment is for such a situation, or could you point me in the right direction?

You’ve basically described a classic case of carbon monoxide poisoning. Which was one of my favorite topics early in med school. (I even used it as a plot point in a novel I started writing. . . and then trunked because it had no plot.)

How does your blood carry oxygen?

The red color of your blood is from all of the red blood cells floating in it.

Red blood cells are really just sacks full of four-unit proteins called hemoglobin. This a representation of a hemoglobin protein:

Each of the parts of the protein has a little “pocket” that contains a unit of heme. I think heme is a truly awesome molecule, so I’m going to show its structure below. Notice the “Fe” in the middle. That’s the symbol for iron, and it’s very important to heme’s function. The other letters are also symbols for atoms; this tells you what the molecule is made of. C = Carbon, O = Oxygen, H = Hydrogen, N = Nitrogen.

Just look at it for a sec. Isn’t it gorgeous?

Yes. Get on with it.

Fine. Back to the point.

Heme has a good affinity for oxygen for the purposes of oxygen transport: It binds oxygen tightly enough to carry it around, but loosely enough to let it go when it arrives at its proper destination. (This “oxygen + hemoglobin” combination is called “oxyhemoglobin”.)

Problem is, it binds WAY TOO TIGHTLY to the pocket, and is very difficult to release. (This “carbon monoxide + hemoglobin” combination is called “carboxyhemoglobin”. See, medical terminology isn’t THAT scary, is it?)

Carbon monoxide can not be used in the same way as oxygen. And it takes up all the heme groups that should be used to transport oxygen. And it doesn’t like to let go of heme once it’s grabbed on.

Bear with me; we’re going conceptual. But I promise, it’s relevant to the subject matter.

First, picture a tank with a bunch of superballs bouncing around in it. That’s what goes on at a molecular level in most substances. A bunch of molecules bounce around, colliding with each other at random.

Now picture these superballs with extra appendages or depressions, three-dimensional fittings like puzzle pieces. If two balls hit each other in exactly the right orientation, they’ll attach together. The pairs, once formed, can also break apart spontaneously.

That’s how molecular events occur. And for these purposes, let’s say that these events are pretty common.

They can both attach to the red balls, but once they’re attached, the yellow balls don’t let go quite as easily as the green ones do. So, if you have equal populations of the two, eventually you’ll end up with more yellow-red pairs than green-red pairs. The yellow out-competes the green for attachment sites.

So, if you have a bunch of carbon monoxide bouncing around the system, oxygen will be out-competed for binding sites in the pockets of the available hemoglobin. The only way to correct this is by increasing the population of oxygen molecules as far as you can; putting in something like ten green balls for every one yellow one. Eventually your population will consist of mainly green-red pairs (oxyhemoglobin) and very few yellow-red pairs (carboxyhemoglobin).

In answer to your question:

You can use carbon monoxide for your scenario if you want to; it seems to fit well. At that point you’d just turn up the oxygen on the bridge or find your character an oxygen mask, and out-compete the carbon monoxide.

Hope that helps! Thanks for writing!

If you use this as if it were real medical information, I’ll fill all of your pockets with superballs. They will become very bouncy pockets. 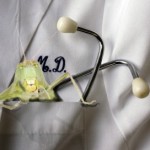 Reprinted with permission from Superballs, Pockets, and Fun With Awesome Molecules on How To Kill Your Imaginary Friends, by Dr. Grasshopper