From a press release:

In a ceremony in Lublin, Poland, on July 9, the Science Fiction Research Association (SFRA) presented the Motherboard of the James Tiptree, Jr. Literary Award with the 2011 Thomas D. Clareson Award for Distinguished Service. Motherboard members Karen Joy Fowler and Pat Murphy traveled to Poland to accept the award.

At the ceremony, Karen Fowler expressed the Motherboard’s appreciation, saying, “As everyone in this room knows full well, when you join a volunteer organization you’d best expect virtue to be its own reward. That’s not meant as a complaint. Pat and I have loved every minute of running the Tiptree Award. We’ve met amazing people and read amazing work and it’s all been a very good time. But we did start the award with a specific mission, to support and encourage a kind of speculative literature we worried was not being recognized, a literature very important to us. And it’s hard to see from the inside whether an impact has been made. So we are enormously surprised, gratified, and grateful that you’ve chosen to honor us with this award. It makes us hope that we are, perhaps, achieving those initial, fundamental goals.”

From its inception in 1990, the Tiptree Award has been associated with chocolate. The first award was a typewriter made of chocolate, and all subsequent awards have included chocolate. For that reason, the SFRA presented the Tiptree Motherboard with a delicious but difficult-to-pronounce addition to the usual plaque: Plum in Chocolate or Sliwka Naceczowska w czckoladzie.

Demonstrating their great will power, Karen and Pat transported the chocolate back to California, where they shared it with other Motherboard members Debbie Notkin, Jeanne Gomoll, Jeff Smith, and Ellen Klages.

The Science Fiction Research Association (SFRA) is the oldest professional organization for the study of science fiction and fantasy in all media. The SFRA promotes scholarship, teaching, and professional discourse through awards, publication, and its annual conference. The Clareson Award ceremony was part of the SFRA’s annual conference. This year’s conference was titled Dreams Not Only American, and was organized by Pawel Frelik. 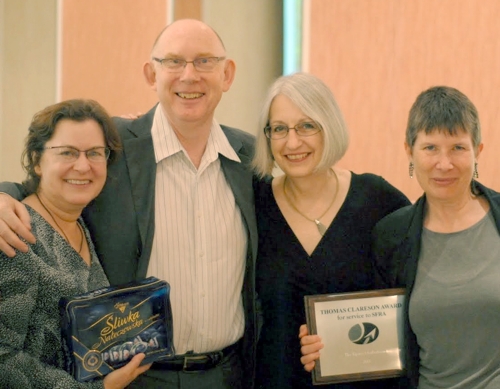