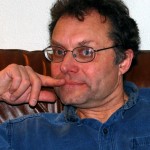 Paul Park has written ten novels and various short stories in a variety of genres.  His most recent published work is a post-apocalyptic Icelandic edda on tor.com.  He teaches writing and literature at Williams College in Berkshire County, Massachusetts, where he lives with his wife and two children.  Ghosts Doing the Orange Dance will soon be coming out in an expanded, illustrated edition from PS Publications.

Your novella Ghosts Doing the Orange Dance was nominated for the 2010 Nebula Award.  Congratulations!  This is an intricate story that, at its core, is about a family and its history. Can you tell us what inspired this story, and what the writing process was like?

I guess I started with the idea that a disappointed old man in a time of crisis, where the way ahead looked dark and uncertain, not just for himself but for the world, would turn back to the past as an alternative to thinking about the future, and would manipulate the past in order to find meaning, or the justification for action.  Looking backward would take the place and function of hope, and changing the past would take the place of imagining the future.  I was also interested in trying to resolve the difference between our ways of writing about the past (as if it were all clear and it was possible to distinguish between truth and lies) and our ways of experiencing it, which is much murkier.

Or that’s one way of answering.  Another would be to say that I come from an unusually well-documented family, especially when you consider we are not in any way exceptional or famous.  And people have always been suggesting that I use some of my family stories in some kind of non-fiction prose piece, an idea which I always rejected, because I could never see a way of arranging them into a coherent or interesting pattern.  But then I figured if I didn’t care about accuracy, I could invent a pattern to join all kinds of disparate material.  I guess I started with a bunch of nineteenth-century photographs, and my grandfather’s paintings, and the transcripts of my other grandfather’s court-martial, and dribs and drabs of various family anecdotes.  As for the writing process, it was kind of like connect-the-dots.

You sound very interested in your own family history. What do you think of the interest that the public has in its own roots lately?

I am interested in my family history, and have become the default keeper of all kinds of bizarre troves–collections of letters, scraps of handwritten memoirs, and mutually-exclusive interpretations and facts.  I’m a sucker for objects that seem to carry with them the remaining sense of a story or emotion.  Most of the things I mention in Orange Dance are connected to the truth in some tangential way.

As for the new interest in the past, I think it might be connected with what I said at first–people write fantasy (which is usually backward-looking in some essential way) more than science-fiction nowadays because the future is harder and harder to imagine in science-fiction terms.  And maybe people are interested in their own families at the point where their own futures become difficult to predict or interpret.

So the story is written from the point of view of Paul Park, a teacher who mentions his novel A Princess of Roumania, which is one of your novels.  Characters named Paul Park have appeared before in some of your other tales and they also cite some of your works. I love the line in Ghosts that says “all writing, after all, is a mixture of experience and imagination, fantasy and fact.” You obviously enjoy blurring the fantasy and fact in your works.  Why is that, and especially why did you choose this route in Ghosts Doing The Orange Dance?

It’s true–in my fiction I have often written about a character named Paul Park.  In the past that has usually been because I disliked the process of making up names for invented characters, and so I’d name them all Paul Park as a kind of place-holder, because I had to call them something.  Partly because of this habit, I think, my name has become for me progressively less and less probable, or credible, or appropriate.

But in Orange Dance I chose a different effect, because “Paul Park” the character overlaps in obvious places with “Paul Park” the author.  This was part of a more general strategy, to build the story out of elements that were partly true, in order to get people to think about their own stories, and to what degree they are invented.  My hope is, people will read the story thinking that some elements are real and some are invented, but they won’t know which are which.  I hope, actually, that the things they end up thinking are clearly false are in fact true, and vice versa.

You know that many readers won’t be able to separate Paul the character from Paul the author.  Have there been any repercussions from this?  Has a strange man ever come up to you on the street and demanded that you stay away from his sister, Andromeda Yoo?

There has been an odd effect that has arisen from using the name so much in obviously fraudulent circumstances–it is not abnormal, I think, if readers think about the subject at all, that they would conclude that I was trying to say something about myself, or reveal something about myself, and that there might be some kind of shambling, chaotic, amalgamated character that is the sum of all those Paul Parks.  And maybe someone then would make the kind of mistake that you suggest, confusing him for me.

So I have to know. Were you born in a caul?

I wasn’t.  But one of my sisters was, and I always envied the power it gave her.

Definitely it was.  The only person he is able to talk to easily, face to face, turns out not to exist.  I was playing with that as a metaphor.  In the real world we build up ideas about each other that we think are going to help us communicate.  But since so many of them are distortions, they don’t have that effect.

Autism is mentioned several times. Is that something that is dear to your heart or something disparate that fit the story?

It’s something dear to my heart, in the sense that I grew up with it:  my little sister, the painter Jessy Park, was an enormous influence on me, and on my work as well.  I write about autism all the time in my stories, though I don’t think I have ever called it by its name before.

The ending is particularly touching.  The seemingly unrelated pieces come together to form something bigger than Paul Park himself.  Suddenly this lonely, disjointed, unreliable narrator becomes part of something meaningful that links him directly in with his family.  Was this something that you plotted ahead of time, or did it pull together on its own?

The story is about a search for meaning in unlikely places, and I knew I wanted an ending that would suggest the narrator had found something, solved a mystery, made some progress, even if it involved some dissolution of himself as an individual.  Independence isn’t all it’s cracked up to be, especially as we get older.

I was intrigued to read about things such as tintypes and bayonets in a work of science fiction.  Then again, your work tends to straddle genres and isn’t confined to what is stereotypically thought of as straight sci-fi.  Do you purposely write stories that will attract a broad audience, or is that something that doesn’t even come to mind?

If I were purposely writing stories to attract a broad audience, I’d be depressed to think what a hash I’d made of it–it’s true my work isn’t easy to categorize, and that even within science fiction and fantasy I’m kind of a specialty taste.  Like most people, I write what I write and then hope for the best.  I wonder, though, whether this story might eventually achieve an audience outside the genre–I hope so.  It’s not a story that fulfills the expectations of a lot of genre readers, who like a clearer and more definite plot.  That’s why I’m so pleased it was nominated for a Nebula; that took me by surprise, after I had read some of the baffled or disapproving things some readers had said about it on-line.

It’s definitely an intricate piece that requires reader attention.  I quite enjoyed it.  Thank you so much for taking the time to be interviewed. 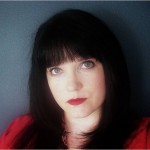 Mercedes M. Yardley wears red lipstick and poisonous flowers in her hair.  An author of whimsical horror and nonfiction, she has been published in Hint Fiction, Werewolves and Shape Shifters: Encounters with the Beast Within, The Pedestal Magazine, and  A Cup of Comfort for Parents of Children with Special Needs.  Mercedes is the nonfiction editor of Shock Totem: Curious Tales of the Macabre and Twisted. Stop by her blog.