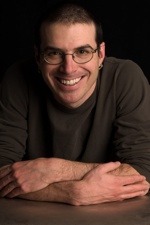 Paolo Bacigalupi’s writing has appeared in High Country News, Salon.com, The Magazine of Fantasy and Science Fiction, and Asimov’s Science Fiction Magazine. His short fiction been anthologized in various “Year’s Best” collections of short science fiction and fantasy, nominated for two Nebula Awards and four Hugo Awards, and won the Theodore Sturgeon Memorial Award for best sf short story of the year. His short story collection Pump Six and Other Stories was a 2008 Locus Award winner for Best Collection and also named a Best Book of the Year by Publishers Weekly

His debut novel The Windup Girl was named by Time Magazine as one of the ten best novels of 2009, and also won the Hugo, Nebula, Locus, Compton Crook, and John W. Campbell Memorial Awards.

His debut young adult novel, Ship Breaker, was a Micheal L. Printz Award Winner, and a National Book Award Finalist. He currently lives in Western Colorado with his wife and son, where he is working on a new novel.

You have had an interesting road to publication. How did you know you wanted to be a writer and what twists and turns did your career take in getting you there?

I worked for thirteen years, failed to sell four novels, wrote short stories for a while after I gave up on novels, and eventually got up the guts to write more novels. My fifth and sixth novels were the ones that sold. The common thread through all of that is that I like the act of writing. Separate from the question of supporting myself or making sales or winning awards (which are lovely, don’t get me wrong), I really like creating worlds, building story, and exploring characters. There’s a core pleasure in that. Without it, I would have given up years ago. So it’s not so much a question of deciding I wanted to be a writer, so much as paying attention to what I enjoyed doing, and nurturing that and taking it seriously on a day-to-day basis.

In much of your work you explore dystopias – worlds where something has gone wrong and people are living on the edge. What first drew you to these types of stories, and why do you keep writing them?

I don’t think of myself as writing dystopias. To me, a dystopia is a deliberately designed society which is superficially perfected, but which is hell for the depicted individuals. That’s not what I do. I describe places where society has broken down or collapsed. I write about poor people. I write about places where technology went wrong, or we failed to adapt. And while it’s certainly hell for my characters, it’s not the same as what I think a dystopia is supposed to do.

I actually think of myself as writing our accidental futures. The kind you get when there’s a lack of forethought, a surfeit of poor planning, or just plain cynicism. And frankly, most of the worst details of the worlds I describe are based heavily on our present. Chittagong, Bangladesh isn’t a dystopia, its just a really poor place where we dump our scrapped ships because they have fewer worker safety and environmental controls. If I’m writing dystopia, then there’s an awful lot of our present world that fits under that umbrella. But hey, it’s a snazzy marketing term that doesn’t contain the dreaded words “science fiction” so maybe I shouldn’t complain so much. People keep telling me dystopias are hot.

As to why I keep writing them… I think they are necessary stories. If I’m going to chop down a forest to print a bunch of books, I’d like to think the stories I focus on are useful and relevant to our cultural conversation.

ROFL. Well, it hasn’t been a bad thing for me.

In writing somber stories, how did you keep yourself grounded, keep yourself from despair as you encountered the injustices you elucidate over and over again?

I think that if I actually kept myself grounded, I would despair. But like many people in wealthy countries, I’ve found that the best medicine is to close my eyes, cover my ears and pretend it’s not happening. If you avoid unpleasant information, it turns out that you can have a very pleasant, despair-free life. It’s quite easy, actually.

Why do you think humanity is so interested in its end (or near end) as to write about it?

I think we write about humanity’s end the same way we watch slasher flicks: it’s voyeurism. Suffering is always better when its abstracted and separated from ourselves, and highly unlikely. It’s delicious, when it’s served from a distance.

Some readers have labeled your Nebula winning novel The Windup Girl as a work of environmental science fiction – but appreciation of it tends to stop there. Was this your authorial intent – or were you trying to explore something else or more with that work?

I was really just trying to write about sexbots, but all that GM food, peak oil, corporate imperialism, genetic engineering, political machination, and culture clash stuff clogged up the works. Also, a lot of the words got in the way. The adjectives, especially. I don’t understand why it’s not appreciated more for its adjectives.

Ship Breaker was a different direction for you. It was written for a YA market and was more “upbeat” than your previous novels. Since for a lengthy period of time you had written more pessimistic works, how did you reorient your mind or do differently to write more optimistically?

I imagined the story that I would have liked to have read when I was a boy, and wrote that. I focused on the idea of adventure, and making sure the characters would have a positive end-note. With a clear goal, the rest of the story fell into line.

What do you want YA readers to take away from Ship Breaker – your novel about a teenage boy who strips metal from old oil tankers for scrap on a beach in the Gulf of Mexico?

In my heart of hearts, I want teens to see that we adults are handing them a giant crap sandwich even as we mouth platitudes about investing in their future. Or maybe I’d like them to think wind power is so cool and sexy that they’ll be inspired to engineer something as cool as the clipper ships in the book. Or maybe I just want them to think that reading is pleasurable and exciting instead of a dreary slog. Or maybe I’d like them to look at their families and recognize that sometimes you have to weed out the really toxic ones. Any or all of the above work for me.

Your work often brings non-Western cultures and ideas to Western audiences. Why do you believe it is important or necessary for more stories and novels to have non-Anglophone characters and settings?

One of the reasons I like writing stories is because I get to go out and learn new things. There’s a huge pleasure in seeing the world differently and being shocked out of complacency. But really, whether you’re interviewing a geologist with the Colorado Geological Survey or living with a Dai family in Southern China, both will give you interesting windows into the world. Western or non-Western is an oversimplification. It’s about having curiosity and asking lots of questions, and being excited to see the world through lots of lenses–those may be racial or cultural or professional, or gender or class-based, or geography-based, or, or, or…. But bottom line, if you’re a writer and you’re not interested in the world around you… really, what’s the point?

In The Alchemist, the titular character saves his medieval-esque city from a magical threat through technology (alchemy). Is this how you see technology? As something that can save people, or your view more closely aligned with The Windup Girl, where technology ultimately destroys?

Technology is just a tool. How we use it says a great deal about us, and almost nothing about technology itself.

How did you and Tobias Buckell go about designing the shared world of The Alchemist and The Executioness?

We used Skype for the brainstorming sessions, so that we could have a more natural interaction, and used Google Wave to build a shared document of facts about the world, so we could both work on the world rules and see them as they came into being as text.

What were the advantage and disadvantages of creating world together but writing individual stories within it?

There weren’t really any disadvantages. It was genuinely fun.

Why did you make the protagonist of The Alchemist a family man?

Jeoz the Alchemist needed a compelling and sympathetic reason to want to use magic in secret. Protecting his daughter’s health gave him the necessary layers of both selfishiness and altruism.

You have done a lot of world traveling, particularly in Asia, do you have any advice for the intrepid traveler on how to do it right?

Stop thinking of yourself as intrepid, for a start. Mostly, if you’re a world traveller, you’re just someone who’s rich enough to buy a plane ticket and a travel guide. It’s not like you’re riding a mule solo across the Sahara. As for doing it “right?” Be respectful. Give your host country’s values and behaviors primacy over your own. By deciding to travel, you’ve decided to invade someone else’s home, so the obligation is on you to be a decent guest.

If you could see one aspect of society change the way you would want, what would it be?

I’d give everybody more wilderness.

John Ottinger III’s reviews, interviews and articles have appeared in Publishers Weekly, Black Gate, Strange Horizons, Fantasy Magazine, SF Signal, Sacramento Book Review, and at Tor.com. John is an affiliate member of the Science Fiction & Fantasy Writers of America and editor of Grasping for the Wind.