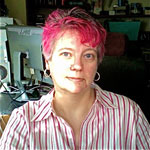 In The Late American Novel: Writers on the Future of Books, editors Jeff Martin and C. Max Magee have collected a number of new writers* talking about the future of books, and although the word has been interpreted quite differently by the different writers, there’s some insightful pieces included in the mix. Their introduction talks about the movement from printed page to the screen as a format change comparable to Gutenberg’s printing press. Like the printing press, the technology increases the accessibility of knowledge — though unfortunately that’s not a change tn which any of the essayists seem to be interested.

The truth about electronic publishing is that nobody is entirely sure what’s going on, and this book showcases that mix of cluelessness and well-educated guesses that seems to characterize these discussions. A phenomenon amplifying the scattershot approach of it all is that different essayists take the word “book” differently. In “A Book Is A Place,” Joe Meno talks about the book as an experience for the reader as he tries to define the word:

For me, a book, in whatever form it takes — hardbound copy, paperback, electronic version, online instrument, text downloaded on a cell phone, even a story read orally — a book is actually a place, a place where we, as adults, still have the chance to engage in active imagining, translating word to image, connecting these images to memories, dreams, and larger ideas.

When we’re talking about books in this form, the possibilities that electronic publishing offer to a text are exciting, and several of the essayists wax rhapsodic about those possibilities. Michael Paul Moore, in “The Future of Writing is in My Jacket,” points not to just the audio and visual possibilities but the interactivity afforded by the medium, via authors’ blogs and social networks.

Rudolph Delson also points towards interactivity of a sort, predicting in “The Best Books Will Be Written Long After You Are Dead”:

Pay attention in 2014; that year will witness the publication of the first non-linear e-novel. it will appear on the internet, and it will advance the technique of Edward Packard in the rarest way imaginable. I said: Edward Packard. You have not read Edward Packard? But he invented Choose Your Own Adventures!

Many of the writers are optimistic — or somewhat so. Benjamin Kunkel examines the overtaking of the graphosphere by the videosphere, saying that it will actually become a digitosphere: while the novel as a form will perish, writing will survive in news articles, snippets, blog posts, and other brief writings. Ander Monson observes:

I wouldn’t worry about the future of story. Story is inescapable. We can’t not perceive our lives as stories, even if we know that stories — even the ones we tell ourselves about who we are — are fiction. That’s how the brain works. In this dissolving, data-fragmented world, we all desrire narrative (as opposed to the actual lived experience of unsatisfying fragments, random encounters, and passing glances.) We will continue to consume it.

Kyle Beachy reminds us, though, in “The Extent of Our Decline,” that we’re not the first generation to panic about literature and change, pointing to a letter from Horace to Augustus lamenting the decline of literature. And that’s a hopeful note, because while the material aspects of novels (the printed page, the binding, etc) may not last, the idea of novels will survive, no matter what. There’s something about the way text and your brain interact that ensures that survival — in my opinion, which I, as with every individual weighing in on this debate, am basing on guesses and experience and gut instinct. 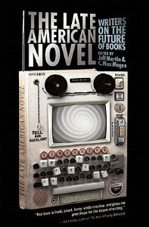 I wrote a while back about electronic publishing and the future and got some flack from people who thought I wasn’t sad enough about what I saw as the disappearance of books as printed objects except for those that survive as art or collector’s items. The friends who have helped me carry box after box of books can testify that on my dying day in the nursing home, there will be an armload of paperbacks on the windowsill as well as the fully-loaded library biochip in my skull. But seriously, if you think that the neighborhood used paperback store is going to survive more than a few more decades…c’mon. Factor in a wave of nostalgia similar to the current LP craze and maybe it’ll stretch up to a century, but after that…nuh uh and yes, I weep for the children who won’t know the joy of browsing among the stacks too, but I also know they’re coming.

But the core experience of reading will remain. Joshua Gaylord speaks to a very specific subset of the novel experience in “Enduring Literature,” when he talks about reading difficult books:

The books that have had the greatest impact on my life are not the ones that entertained me the most — rather, they’re the ones I’ve had to endure. Ulysses wasn’t a “good read” — it was a project, a mission, a brief military stint undertaken by a strong-willed idealistic youth. It was a labor to carry it, it required innumerable accouterments to be read (not just the two other texts but also a notebook and a pen, a highlighter, slips of scrap paper to mark particular pages.) Even the page design was more an opponent than a partner: There were line numbers on each page. Line numbers! This book wasn’t kidding around. Reading it, you felt you were staring down the business end of Literature.

That’s exactly why I took a summer class one year in grad school that involved reading Finnegan’s Wake. I may not understand more than a scanty scanty number of those words but by god every single one of them passed under my eyes and I consider that as much an achievement as I do any publication or quitting smoking or the terrifying time I ziplined. And I enjoyed the heck out of the book. If I got a tattoo with words in it, it might well be this: A way a lone a last a loved a long the riverrun, past Eve and Adam’s…

But I digress. And it’s passion for books that makes me do so, which is one of the pleasures of these essays, because many of the writers share this passion. Some pieces are full of clever prose and little heart, but at the moments when an essayist admits their unabashed and honest love for text and page that they become moving and interesting. It’s both charming and touching, for example, how many writers wax rhapsodic about books as physical objects. In “Home Word Bound,” Nancy Jo Sales talks about books as a source of identity:

I can’t think of myself without them. …The older I get, the more boxes there are — on my last move, the grumbling moving men counted close to seventy cartons. My books have accumulated around me like a kind of history of my mind, of my experience and knowledge, however limited. Having them near me in a physical way serves as a reminder of who I am — like old photographs that you actually re-enter, reliving the moment captured in the images.

Katherine Taylor notes in “Survival Tips For Writers (And Books In General): A List”, “You’re not home until you unpack your books.” while in “Scribble,” Victor LaVelle touches on this theme as well:

If you pull down the books that are mine, meaning the ones that I brought with me from my single life, you can open more than half and find handwritten notes, sometimes whole paragraphs, scribbled on the end pages, or in the margins of the text. I’ve got a copy of Butterfly Stories, in hardcover, and when I opened the back cover while working on this essay I found one word written at the bottom of the very last page of the story. I wrote, “Yikes!”

But for many there’s a pragmatism about it all. Deb Olin Unferth sums it up in “The Book”:

With regard to the object itself, there does seem to be the danger that the bound book could go the way of other dated and diminished civil objects: matchbooks, hair culrler,s drive-in movies — things that still exist, but thinly. There’ll probably be fewer books in people’s houses, fewert in backpacks and briefcases, fewer bookstores. And, yes, that’s sad, because we like bookstores and backpacks full of books (even the drive-in movie still holds a place in our hearts), but you can’t hold onto something out of sheer sentimentality — or you can, but it won’t work. Besides, a lot of people never had any books in their briefcases to begin with. So in the long run I don’t think it will matter much.

Which seems on track to me, because there are things vanishing from this world that I will mourn as much as the book: blue whales, for one, and places for solitude in nature, and unsupervised trick-or-treating. Things come and go, which is what makes the world interesting, and I, like most of the writers in this book, believe that narrative itself will endure, much like gravity or our dependence on oxygen.

Towards the end of the book, we comes to an essay in the form of e-mails between David Gates and Jonathan Lethem, “A Kind Of Vast Fiction,” which originally appeared in PEN America 12: Correspondances, which sums up so much of the things touched upon by other essays, and in which Lethem asks what is, I think, the core question of this collection:

How is it, and how does it feel (if it’s true), that we happen to occupy the most completely postmodernism-resistant art form, after all? I mean, I’m no David Shields, but I’ve made my own passing gestures at appropriation, and yet fiction — the old transaction, the old transmission — just seems to springily retake the basic shape that it was put in by Austen and Dickens (a shape only mildly deformed, in the end, by your Becketts and Barthelmes), time and time again.

Regardless of any boundaries or distinctions between genre and “literary” fiction we choose to draw, what is happening to the book — to the novel” is the sort of thing that worries anyone who writes. Some crucial core will survive, most of us agree, but what strange sea changes will happen? We book-lovers are seeing our partners transform even as we daily make love to them. Who is that future stranger they’re becoming — and will we love them just as well?

*A couple of caveats — My take on this book may not be that of the average publishing professional, particularly since I used to edit an online magazine and prefer publishing online to in-print . Furthermore, as a spec-fic writer, any title with “Writers of the Future” takes on weird dimensions, because I always imagine Jay Lake and Ken Scholes speaking the words. (I’m also irritated by views of the future like Sonya Chung’s piece, “In The Corporeal Age, We Will Know the Names of Trees,” where gender-exclusive language is a given, but I know that’s just me.) 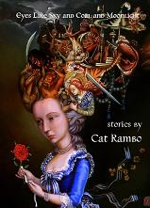 Find Cat Rambo’s fiction, which includes over a hundred published stories, at her website. She teaches at Bellevue College as well as via online workshops and serves as a volunteer with Clarion West. Her most recent publication is her short story collection for Kindle and other e-readers. She is the editor GoH at MidSouthCon this March.