As many of you know, Writer Beware maintains a Thumbs Down Agency List, which represents the agencies about which Writer Beware has received the largest number of complaints over the years, or which, based on documentation we’ve collected, we consider to pose the most significant hazard for writers.

The other day, on one of the online writers’ discussion groups I frequent, someone asked a couple of questions about the list that I thought it would be instructive to answer here: why do we include agencies on the list if they’re not currently active? And why don’t we regularly add new agencies to the list?

We leave non-active agencies on the list because they often start up again, or start up under different names. Cris Robins of The Robins Agency, for instance, isn’t operating just now as far as we know, but she has closed and re-started her business several times over the years, and we wouldn’t be surprised to learn that she’s back at it.

The numerous name changes and aliases of many of the agencies on the list also attest to their survival instinct. For instance, the agency currently calling itself Best Selling Book Rights Agency has been in continuous operation since 2001, but has had more than six name changes during that time.

We do occasionally take agencies off the list, if there’s a really unequivocal reason for their demise–such as a grand jury indictment or jail time. That’s why the list no longer includes George and Janet Titsworth, proprietors of Helping Hand Literary Services, or Martha Ivery, who ran literary agencies under several names and aliases. However, even jail time doesn’t always deter the really determined scammers. American Literary Agents of Washington–a.k.a. Capital Literary Agency, a.k.a. Washington Literary Agency–vanished from the face of the earth when its owner went to prison on an unrelated charge. When he got out, he immediately began operating again as Clark, Mendelson, and Scott (a.k.a. Franklin-Madison Literary Agency.)

As to why new names don’t regularly appear on the list–that’s an interesting question, and the answer reflects the changes in publishing over the past decade.

When Writer Beware started up, before the turn of the century, literary agent scams were by far the most prevalent kind of fraud writers could expect to encounter. On average, we heard about a new scam agency every couple of weeks. But the advent of easy, inexpensive self-publishing services, as well as the rapid growth of the small press world, has given writers alternatives to the traditional literary-agent-brokered route to publication. As a result, many writers no longer see literary agents as the be-all and end-all of their publishing journey, and never bother with the agent search that used to be perceived as absolutely essential.

Which, as you can imagine, makes it much harder for a scam agent to make a living. Many formerly highly profitable agency scams have disappeared, or have dwindled to a shadow of their former selves (for instance, Arthur Fleming Associates, about which I used to get a question or complaint every few weeks, and now get only an occasional query). Others have shifted their operations to keep pace with change–such as Best Selling Book Rights Agency, which began as a fee-charging agency but has diversified into a variety of other predatory activities, or SterlingHouse Publisher (which recently changed its name to International Book Management Corporation), which axed its fee-charging Lee Shore Literary Agency in 2008 and currently focuses exclusively on vanity publishing and selling various services.

Now, in 2012, Writer Beware only rarely hears about brand-new agent scams; even inquiries about well-intentioned amateur agents–which once made up a large percentage of our correspondence–have dwindled to a trickle. By far the most frequent questions and complaints we receive involve small publishers, various flavors of vanity presses, self-publishing services, and marketing or other so-called services aimed at small press and self-published authors.

As a result, while the Thumbs Down Agency List is updated as we receive new information about name changes, spinoffs, etc., we haven’t actually added an agency since we first put the list online.

So if you’re feeling thankful for the wild new world of publishing options, here’s another reason for gratitude: it has seriously reduced the prevalence of literary agent scams. However, scam agencies are still out there–plus, the reduction in their numbers has been more than offset by the proliferation of other scams aimed at writers. You still need to be careful out there. 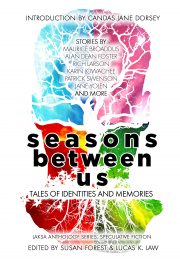 What is a life well-lived? Travel with 23 SF&F authors through the seasons of life to capture the memories and moments, as they cope with their own journeys of growing older. Recommended by Publishers Weekly, Library Journal, and Kirkus Reviews.