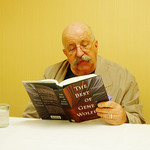 SFWA has named Gene Wolfe as the 2012 recipient of the Damon Knight Memorial Grand Master Award for his contributions to the literature of Science Fiction and Fantasy.

Gene Wolfe’s fiction first saw publication in the 1960s. He is best known for the novels The Book of the New Sun, Peace, and The Fifth Head of Cerberus, and received many awards, including the Nebula, World Fantasy and Locus.

In Gene’s own words: “There was a time – long ago to most of you, though it seems recent to me – when Rosemary, our children, and I were living from paycheck to paycheck and barely getting by. I’d had three not-terribly-good stories published in a college magazine before I went into the Army, and I thought I might just possibly write on the side and make us a little extra money. I sold a few stories. Then it was time for school to start again, and Rosemary began badgering me for money for school clothes. I would gladly have given it to her if there had been any. Another story, “Car Sinister,” sold, and instead of depositing the check I got the manager of the hardware store to cash it for me. I took it to Rosemary: ‘Here’s every dime I got for that story. That’s how much you have for school clothes.’ A few days passed, and I was sitting on the kitchen floor trying to mend a chair. Rosemary came up behind me and said, ‘Shouldn’t you be writing?’

That’s when I knew I was a writer.

You’d better watch your step, folks; you’re raising me to a height I would never have imagined. If you keep this up I’ll start thinking I’m a good writer.”

SFWA President John Scalzi, on choosing Wolfe: “You’d have to search far and wide to find a contemporary fantasy writer who has not been directly influenced by Gene Wolfe. His prose is a joy to read, his stories are dense and deep, and his worlds are dark and rich beyond compare. And to top it off, he is a genuinely delightful human being. It is well past time that his stories, his style and his contribution to our genre and to literature in general are recognized and celebrated with a Grand Master award. I am thrilled and humbled that Gene has graciously agreed to be our recipient this year.”

Connie Willis, 2011 Damon Knight Recipient: “Oh, how wonderful that Gene Wolfe is going to be a Grand Master, even though of course he already is in the minds of everyone who’s ever read his books or who’s ever known him! He’s one of the loveliest people it’s been my privilege to know in science fiction–courtly, kind, frighteningly intelligent, and at the same time endlessly patient with us lesser mortals. I know everybody will be praising his books during the next few days, and deservedly so, but I also want to put in a word for his equally amazing short stories, like “The Island of Dr. Death and Other Stories” and “The Death of Dr. Island”–even his titles are brilliant!–and “Golden City Far” and “The Detective of Dreams” and “Memorare.” And especially “Seven American Nights,” which served as my first–and staggeringly memorable–introduction to him.

Congratulations, Gene! SO well-deserved! And such good news!”

The Damon Knight Memorial Grand Master Award is given by SFWA for ‘lifetime achievement in science fiction and/or fantasy.’ Wolfe joins the Grand Master ranks alongside such legends as Michael Moorcock, Anne McCaffrey, Ursula K. Le Guin, Isaac Asimov, Ray Bradbury and Joe Haldeman. The award will be presented at the 48th Annual Nebula Awards Weekend in San Jose, CA, May 16-19, 2013.

Gene Wolfe photo courtesy of darksong under a CC 2.0 license.