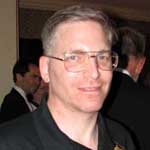 Larry Hodges, of Germantown, MD, is an active member of SFWA with over 60 short story sales, over 50 of them since summer 2008. His story “The Awakening” was the unanimous grand prize winner at the 2010 Garden State Horror Writers Short Story Competition. His story “Rationalized” won the November 2011 Story Quest Competition. He’s a graduate of the six-week 2006 Odyssey Writers’ Workshop, the 2007 Orson Scott Card Literary Boot Camp, and the 2008 Taos Toolbox Writers’ Workshop. He’s a full-time writer with six books and over 1400 published articles in over 140 different publications. He writes about and coaches the Olympic Sport of Table Tennis, is a member of the USA Table Tennis Hall of Fame (Google it!), and once beat someone using an ice cube as a racket. Visit him at www.larryhodges.org.