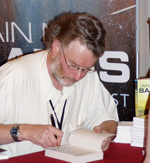 Scottish author Iain M. Banks (b.1954) died on June 9, a little over two months after announcing that he was suffering from late-stage gall bladder cancer.  Banks began publishing in 1984 with the non-genre novel The Wasp Factory, and adopted the use of his middle initial in 1987 for his genre work, beginning with Consider Phlebas, the first novel on his long-running Culture series.  Within the culture series, Banks also published Look to Windward, Use of Weapons, and the British Science Fiction Award winning Excession, along with others.  Banks won a second BSFA for his non-series novel Feersum Endjinn.  Banks’s non-genre work, equaled his genre work, with The Bridge, A Song of Stone, The Steep Approach to Garbadale, and more.  Banks was selected as a Guest of Honor for Loncon 3, the 2014 Worldcon.  Following the announcement of his cancer diagnosis, Banks made it clear that he would be unable to attend under any circumstances, but Loncon acknowledged that programming in his honor would continue as planned. Banks’s final novel, The Quarry, about a man contending with cancer, had its publication date moved up following the announcement of his condition in the hopes that Banks would be able to see its publication.  The Quarry will be published later this month. Banks’s influence as an author extend beyond the field of science fiction, into mainstream literature and video games.