On July 2 John Scalzi, immediate past president of the Science Fiction and Fantasy Writers of America, announced his new Convention Harassment Policy.

When my friends and fans go to conventions, I would like them not to have to worry, if they are skeeved on by some creep at the convention, that the convention will take the problem seriously. I would also like them to be able to know how to report the problem, should such a situation occur.

That being the case, moving forward from this very instant, the following will be a hard requirement for my being a panelist, participant or Guest of Honor at a convention:

In the following week, dozens of SFWA members have co-signed Scalzi’s Convention Harassment Policy. Five current SFWA officers and several former officers have already indicated they will also follow this policy. They are:

Other SFWA members who wish to co-sign this policy may do so publicly here: http://whatever.scalzi.com/2013/07/03/my-convention-harassment-policy-co-sign-thread/

Because SFWA members have shown interest in this issue, they should know that many conventions already have such harassment policies in place, including:

Members may also wish to check the Con Anti-Harassment Project database, which lists conventions, their articulated position on anti-harassment and sexual harassment policies, and their contact information: http://www.cahp.girl-wonder.org/con-database/

SFWA members who are looking for additional resources to help them individually encourage harassment policies at conventions may want to refer to this blog post by Annalee Flower Horne at http://geekfeminism.org/2013/07/03/how-to-be-an-ally-speaker-edition/. Analee put together a blog post listing resources for writers and others who want to support these policies. She writes:

There’s no need to make a big public statement if you’re not comfortable doing so. All you have to do is:

Step Two is key. If you just decline the invitation, the conference will have no way of knowing that there is a simple step they can take to change your mind and make their event safer and more welcoming.

Annalee’s post provides templates for emails that writers can use to communicate with cons, as well as many useful links. Additional discussion and examples of draft letters to convention committees may also be found in the SFWA online forums.

SFWA members who want to be active in additional ways in reducing harassment may want to look at the Con Anti-Harassment Project (CAHP), which describes itself as “a grass-roots campaign designed to help make conventions safer for everyone. Our aims are to encourage fandom, geek community and other non-business conventions to establish, articulate and act upon anti-harassment policies.” http://www.cahp.girl-wonder.org/

For more information on this announcement, please contact Jaym Gates at communications@sfwa.org. 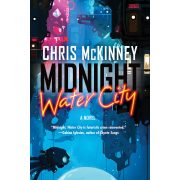 Hawai‘i author Chris McKinney’s first entry in a brilliant new sci-fi noir trilogy explores the sordid past of a murdered scientist, deified in death, through the eyes of a man who once committed unspeakable crimes for her.