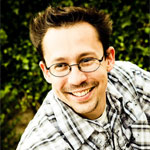 How can taking an improv acting/comedy lesson improve your writing? Well, for one thing, it forces you to think differently about story. It gets you out of your comfort zone. You can’t be god of the world if you’re partner has just said you’re the slave of the Roach Kings of Blargon Five. There’s no second draft. There’s practice and performance and that is it. You have to create via collaboration and failure always seems imminent!

Sure, most writers are solitary critters. But collaboration without a net is useful in a bunch of ways. It forces you to think on your feet. As they say in the field, no matter what’s on stage, you have to “justify it.” Example:

You walk on thinking you’re a private eye, magnifying glass at the ready, investigating a dead woman. Your partner runs on stage and screams:

“Dad, stop staring at the monster in that sewer pipe! We’ve got to go before the gas wears off!”

“What the hell are you talking about? This is a dead lady, Captain, and I’m the best PI in the business . . .”

. . . you have royally fouled up. You ignored your partner’s “offer” of the reality on the scene.  That’s called “blocking.” When you block, you are not helping. Sure, you can recover from it (make the kid’s dad a PI whose hunting lady monsters and calls his son Captain), but you’re making it about you. And it should be about the story. You gotta juggle what they throw at you and don’t pretend an apple is a chainsaw.

There is correlation with narrative fiction, too. Improv requires momentum and building tension, like all good stories. But the route to this tension is to keep saying “yes” to the “offers” (the story stuff about characters and plot and location and motivation people introduce). You keep saying yes until you find something that someone values. Once an offer is noticed, you start building upon it.

You’d think that saying yes to things would be the enemy of conflict, right?

“Hey, professor, that monkey is eating a robot!”

“Yes, and that robot was my best friend, Iron John! Get the Mega Ray loaded, Eyegor! DEATH TO ALL MONKEYS!”

BAM! CONFLICT GALORE! And the scene can keep getting worse (“yes, professor, but that monkey has your deflector armor! Perhaps we should nuke it!”) . Which is good!

Also, you don’t have a lot of time to waste once someone shows up on stage. Character, location, and stakes need to be established quick. No hobbit birthday parties and histories of pipe weed: get to the goddamn story!

Granted, gag endings, ridiculous stakes, and collapses of reality are all part of the form. Not always so in print. But saying yes to things as a means to conflict? Good trick!

But collaboration doesn’t always mean cooperation (dun dun duuuuh!). Free-form group improv is called a jam. In a jam, anyone who shows up can get on stage: from amateurs, to pros, to people who came in out of the rain. The jam is led by a house troup who controls the lights, keeps a semblance of order, and even participate. You break up in groups and, with a little direction, make short-form scenes on the fly. This is the wild west of writing stories live before an audience. And it can be brilliant, weird, and compelling.

But it can also stink.

A lot of jams become competitive.  Stand up comedians often join jams and drop great jokes . . . and kill the momentum needed to build a scene.  They just want it to be about them. I asked one vet about this competitive aspect, and he said, “Yeah, mostly jams are great . . . but it can get brutal. One guy just would not leave the stage. Wanted to finish his jokes, even though the scene was dead. Tough stuff.”

Whenever I’ve participated in a jam, I’ve learned something. Though not from succeeding. I failed.

Elizabeth Hand once gave me some great advice. “If you’re going to fail, fail gloriously. Push yourself past what you can do in all directions. You’ll learn more by failing big.” Failure and improv are best buds. Recovering, justifying, magnifying failure can make a scene crackle and pop. Because of this, improv can be more stressful than other performance or solitary arts. But it can also be more forgiving and instructive.

So, every time I’ve done a jam, I’ve thought: “Let the failure be righteous!”

I had scenes with aggressive people who dominated the spotlight and didn’t listen, but I also had the fun of “walk ons”, spicing a scene for the primary players; I initiated scenes with an instant premise: one sunk and one swam; worst of all, I had the house lights dim, killing a scene before it even got started.

Again, why am I telling you all this?

Even in the slew of failures, mild success, and bright spots, my writer’s brain was running wild. I’d be thinking about how scenes worked, and why. In fact, failure was always the most instructive. I realized I’d forgot my early training and tried to wing it, and ended up falling on my face; I considered what made other scenes pop in the wake of my failure; I thought about stakes, character, how to use space objects (imaginary stuff) to establish place. Then, when I went to the next jam or practice, things clicked even better.

So what’s the bottom line? What can a writer learn from improv? Fine, you want a list, you’ll get a list

But studying other art forms is also just a joy unto itself. Find one you like, get outside your range of control, and fail your ass off. Don’t worry, when you write about it later, you can revise and say you were always amazing.

Jason S. Ridler is a writer and historian. He is the author of BLOOD AND SAWDUST, the Spar Battersea thrillers (DEATH MATCH, CON JOB and DICE ROLL), the short story collection KNOCKOUTS, and has published over sixty stories in such magazines and anthologies as The Big Click, Beneath Ceaseless Skies, Out of the Gutter, and more. His popular non-fiction has appeared in Clarkesworld, Dark Scribe, and the Internet Review of Science Fiction. A former punk rock musician and cemetery groundskeeper, Mr. Ridler holds a Ph.D. in War Studies from the Royal Military College of Canada. Visit him at twitter at http://twitter.com/JayRidler, Facebook , http://www.facebook.com/Ridlerville, or his writing blog, Ridlerville, at www.jsridler.com