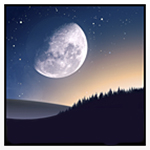 What did the Egyptian sky look like in 1006 CE, when a supernova could be seen during the day? What dates did full moons illuminate the fog of Whitechapel as Jack the Ripper prowled the streets? When a character swims the Arctic Ocean, in a story set two thousand years in the future, what star might she use to guide her passage?  Stellarium provides answers.

Stellarium is a free, open source application that shows you what the sky looks like from any point in the world. Is your imagination bigger than the world itself? Stellarium offers views from the moon and several other objects in the solar system. Have a story that features a Martian colony in 2112? Would you be able to see Earth just after sunset? Simply select your location–present, past, or future–and take a look. 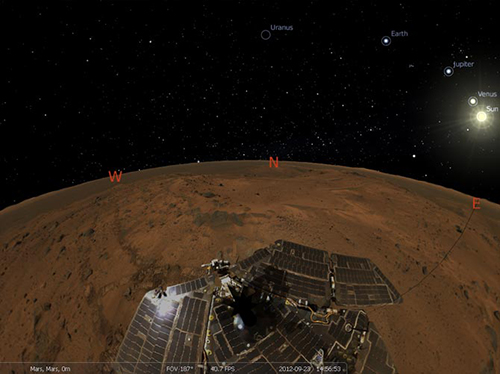 No world to design? Use the program as intended: an aid to observational astronomy. That bright star in the west–what’s its name? Oh! It’s the planet Venus. … How far away? When will it set? Where’s Mars tonight? Find out with Stellarium. It’s the same program used by many planetariums.

As an open source project, additional scripts and functionality are offered by a community of supporters. Landscapes, light pollution, and weather-effects like fog can be activated for additional visualizations.

Interested in Norse constellations? What shapes did the Navajo or Aztecs see in their skies? Stellarium can display  different “sky cultures.” Short descriptions on associated myths accompany the cultural constellations. Fantasy writers take note:  they’re both interesting and useful in generating worldbuilding ideas.

A Stellarium Wiki provides a list of features, FAQ’s, and help files.

It’s free, open source, and available for Linux, Mac OSX, and Windows. . .  what are you waiting for? Grab a copy and unlock the skies.

Note:  a previous version of this post appeared on the SFWA blog in 2012. Since then, Stellarium has been updated and additional features and plugins have been added.

Have a writing tool, tip, or article you’d like to share with readers of the SFWA blog? Email: webeditor@sfwa.org

Yolen is a past president of SFWA, winner of 2 Nebulas 3 World Fantasy Awards. Her 400th book will be out in 2021.