The first issue of Ares Magazine is now in the hands of subscribers and available for purchase. The 84-page first issue features nine original science fiction and fantasy stories, an interview with game designer and author Bruce Cordell, and an article on singularity written by best-selling science fiction author William H. Keith (who also writes under the pseudonyms Ian Douglas and H.J. Ryker).

The flagship game included with the magazine is Bill Banks’ War of the Worlds, a two-player game of conquest and survival that pits the military forces of Queen Victoria against Martian forces under the command of the evil Martian overlord. The game includes a rule book, die-cut playing pieces, and a large map.

Production on this unique product launched after a successful Kickstarter in January earlier this year. Editor-in-chief Mike Anderson, who premiered the magazine and game at San Diego Comic-Con last month, is very happy with the result.

“We faced some challenges in the printing process,” says Anderson. “We apologize for the delay, but as we’ve said from the beginning, we are more interested in doing the job right than doing the job now.”

The first issue is available for purchase at select comic books stores and online for $30. Subscribers can choose from a variety of options at www.ossgamescart.com, including a six-issue subscription for $120 and a new three-issue starter plan for $78. The site also provides options to purchase the game and magazine separately, and a digital version of the magazine is available on GooglePlay for $3.99.

Ares pays 5 cents per word for original fiction. Reprints are also considered at 1 cent per word. Submission guidelines are available. 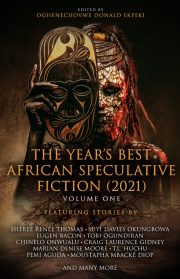 The first ever Year’s Best African speculative fiction anthology with works from some of the most exciting voices, new and old, published in the 2020 year.