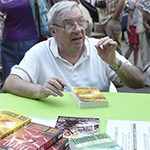 Jack McDevitt, science fiction author, is the 2015 winner of the Robert A. Heinlein Award. The award is bestowed for outstanding published works in science fiction and technical writings that inspire the human exploration of space. This award is in recognition of Mr. McDevitt’s body of work including over 21 novels and 81 short stories.
The award will be presented on Friday, May 22, 2015 at opening ceremonies during Balticon 49, the Maryland Regional Science Fiction Convention. Balticon and the Robert A. Heinlein Award are both managed and sponsored by The Baltimore Science Fiction Society. A grant from the Heinlein Society funds a quarter of the costs associated with the award.

The Robert A. Heinlein Award is a sterling silver medallion bearing the image of Robert A. Heinlein, as depicted by artist Arlin Robbins. The medallion is matched with a red-white-blue lanyard. In addition, the winner receives two lapel pins for use when a large medallion is impractical, and a plaque describing the award, suitable for home or office wall display.

The Robert A. Heinlein Award selection committee consists of science fiction writers and was founded by Dr. Yoji Kondo, a long-time friend of Robert and Virginia Heinlein. Members of the committee were originally approved by Virginia Heinlein. The current Chairman of the Selection Committee is Michael F. Flynn.

Virginia Heinlein authorized multiple awards in memory of her husband, including the Heinlein Prize, which is fully funded by Virginia Heinlein’s estate, and a National Space Society award for volunteer projects.

More information on the Robert A. Heinlein Award, including past winners, can be found at http://www.bsfs.org/bsfsheinlein.htm.

More information on Balticon can be found at www.balticon.org.

To contact the Heinlein Award liaison at BSFS, email dale@bsfs.org.