In The SFWA Bulletin #207, published in February 2016, I talked about Romance Tropes for SFF Writers. I described at length the current top ten most popular romance tropes and how they can be worked into science fiction and fantasy plotlines in ways that will please romance readers. I also offered the One Rule (there must be a happy ever after (HEA) or happy for now (HFN) conclusion to the romance, along with five guidelines for navigating the contract with the romance reader.

In a subsequent online conversation, I realized I forgot one. It’s an important consideration that arose because a recently released debut science fiction novel was marketed to romance readers as science fiction romance (SFR), but violated a major romance expectation. So much so that a key SFR reviewer for a prominent site ultimately declined to review the book. This was especially unfortunate because she really enjoyed the book! It, however, did not fit the parameters of an SFR because it violated two key expectations.

I’m going to caveat here that they were mainly angry at the publisher for taking that marketing stance. Most readers are savvy enough to know that the author likely had little say in the genre choices and marketing decisions. They are also increasingly offended by attempts to cash in on the romance dollar – in 2013 the total sales value of romance, including all subgenres, reached $1.08 billion – without delivering on the romance reader contract.

In this case, readers were especially incensed because the book violated the One Rule at the very end of the book. It did not have an HEA. There are also indications that there will be a new love interest in the sequel, which is a precarious use of romance tropes.

Again, I’m not criticizing this author. She wrote the book she wanted to write. And she’s far from the only SFF author to run afoul of these romance expectations. This simply provides an excellent and specific example that I’ll break into two parts.

No HEA or HFN

The romance in the book does not end happily. It does not end with even the promise of happiness. The heroine and the hero part ways with every indication that this will be a permanent separation.

Now, there is nothing wrong with this ending for a science fiction novel. However, for a book marketed as SFR, it’s a huge violation of reader trust. It’s an ending that makes romance readers throw the book against the wall. It’s a profound betrayal that destroys their trust in an author.

An argument that gets introduced in a lot of these conversations – always from non-romance readers – is that the HEA/HFN is not mandatory. That it’s okay for a story to end tragically. Romeo and Juliet gets trotted out. And sure, that’s true! But Romeo and Juliet is one of Shakespeare’s tragedies! Sure, there’s a romance in it. You can even say the romance is the core of the story, but that doesn’t make it a romance. Why not?

Because it ends tragically, not happily.

Which leads me to my addendum guideline, which I’m going to call #6.

Guideline #6. Be wary of swapping out one love interest for another in successive books in the series.

In this example, the hero and heroine* part ways at the end, but readers also noted that there is another character being positioned in the story as a possible replacement hero. Old Hero goes stoically home. New Hero is waiting in the wings. It could be that the author/editor/marketers believed the promise of this new love interest would salve the romance reader desire for romantic promise.

It many ways, this is an even greater violation of romance reader trust. They already, along with the heroine, fell for Old Hero. They don’t want New Hero.

For some reason this love interest swapping happens with relative frequency in SFF stories. Maybe that’s an SFF trope? I’m much more familiar with romance tropes, so I’d be interested to know if that’s the case. To a romance reader, however, this kind of plot decision feels – to be perfectly frank – like lazy writing. A good romance depends on heavy conflict between the hero and heroine. It should feel impossible for them to find a happy resolution to their romance. The more reasons they can’t possibly be together, the more satisfying it is for the romance reader when the characters manage to do it. Ideally huge sacrifices by the hero, heroine or both will be required.

Thus, when the conflict proves too great and the heroine essentially says, “Oh, well, I guess it’s not meant to be, but hey, look – cute guy over there!” that functions to undermine everything the story established. The reader no longer believes in anything about their love affair and, worse, no longer trusts the character or the author. The next time the heroine declares her love, the reader will know that she might not mean it that time either and won’t invest.

Sure, there are ways around this. That’s why it’s a guideline, not a rule. But it’s tricky to navigate and usually requires justification for why the first romance wasn’t worth fighting for. Evil magical or drug-induced mind control might be needed to excuse such a character flaw.

Or, if you want those romance readers and their ready dollars, find a way to keep the hero and heroine together. It’s worth the work!

*I talk about this in binary for simplicity, but this applies to polyamory and homosexual romances, too. 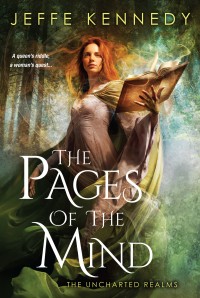 Jeffe Kennedy is an award-winning author whose works include non-fiction, poetry, short fiction, and novels. She has been a Ucross Foundation Fellow, received the Wyoming Arts Council Fellowship for Poetry, and was awarded a Frank Nelson Doubleday Memorial Award. Her essays have appeared in many publications, including Redbook.

Jeffe can be found online at her website: JeffeKennedy.com, every Sunday at the popular Word Whores blog, on Facebook, on Goodreads and pretty much constantly on Twitter @jeffekennedy. She is represented by Connor Goldsmith of Fuse Literary.