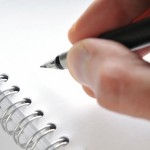 Here’s an assignment I give my students:

They receive a copy of the first chapter of H. G. Wells’ War of the Worlds.

I tell the students that Mr. Wells has just received a note from his editor. “Great stuff, Herbie, but you go on too long here. Cut this first chapter in half.”

Mr. Wells, alas, has passed on. Fortunately for us, so has the novel’s copyright.

The task is up to the students. How do they cut half of this chapter without disturbing its essence?

The students get to tackle this project individually, by marking up their own copies. We also work on it collaboratively. I put a copy of the chapter up on the screen in Word. I allow the students to debate which parts should stay or go, and we keep cutting until the word count at the bottom left corner of the screen reads 1,125.

You may ask: why do this to a classic? What did H. G. Wells ever do to me?

The late author Richard McKenna once described in an essay, “Journey With a Little Man,” how editor Horace Gold sent back a story of his, requesting he cut it by half. McKenna, thus far unpublished, did so, and in the process learned what makes a good story. “Casey Agonistes” is considered by many critics his best.

Ask students to do this to their own stories and their faces turn ashen. Their babies? By half? What madness is this?

So by practicing at first on Wells, they can see what the process entails before going on to apply the knife to their own deathless prose. The exercise not only requires careful editorial skills, but an equally careful reading of the text. What’s important in the telling? What’s icing on the cake?

No mere trimming. The fifty percent number is meant to be tough – to the bone.

I show them the introductions to the film versions of the story. We listen to the opening of the classic radio adaptation by Orson Welles and the Mercury Theatre. We look at two different comic book adaptations. What did the adaptors include? What did they jettison? (almost all of them include that chilling line, “… intellects vast and cool and unsympathetic, regarded this earth with envious eyes, and slowly and surely drew their plans against us.”)

The students aren’t married to any particular approach. Some went after the adjectives, as they had been taught by some previous English teacher. Some went after every parenthetical and prepositional phrase (goodbye to, “I scarcely need remind the reader…” and “In spite of all that has happened since…”). Some went after all the astronomical information, or tried to cut it to its most succinct expressions.

A few ambitious students rearranged paragraphs, or combined sentences from each paragraph in different ways. I’ll never forget the student who chose to begin the novel with the first sentence from the ninth paragraph: “The storm burst upon us six years ago now.” I had never noticed how that sentence could work as an opener until she placed it there.

What always surprises me is how the exercise draws out talents in my students heretofore unrevealed. The habitual overwriter cuts each description to lean essentials. The student who always drops punctuation, even commas, demonstrates disciplined (and correct!) use of semicolons.

Every editing bears the marks of its editor.

The exercise also gives us an opportunity to admire, even marvel at Wells’ storytelling brilliance. I point out to them how everything that happens in the story is prefigured in the first few sentences. He tells us where we’re going and then he takes us there. His prose, like his vision, was far ahead of his time.

The next step, of course, is to get students to apply what they’ve learned to their own work.

It’s one thing to be “vast and cool and unsympathetic” to a giant of the field, and quite another to bring it on home.

Richard Chwedyk is a Nebula Award-winning science fiction writer, poet and teacher. His work has appeared in Nebula Awards Showcase 2004, Year’s Best SF 7, Year’s Best SF 8, Fantasy and Science Fiction, Amazing Stories, Space and Time, 80! Memories and Reflections on Ursula K. Le Guin and other publications. A collection of his “saur” stories is making the rounds. He lives in Chicago with his wife, poet Pamela Miller, and occasionally blogs at Critinomicon.