Janet Asimov (b. Janet O. Jeppson, 1926) died on February 25. Along with writing,  Jeppson has had a long and successful career as a psychiatrist, publishing numerous scientific articles under the name Janet O. Jeppson, and serving as a popular science columnist for the L.A. Times.  Her first story was published in The Saint Mystery Magazine in 1966, with many of her early works published under the name J.O. Jeppson, including The Second Experiment and The Last Immortal.  During this time, she also wrote several mystery stories, some of which were collected as The Mysterious Cure and Other Stories of Pshrinks Anonymous.  She eventually switched to her married name of Asimov and co-wrote with her husband, Isaac Asimov. Together, they released the YA novel, Norby, the Mixed-Up Robot and several additional books in the series. Isaac Asimov was later quoted that despite the joint byline, Janet Asimov did 90% of the work. Throughout her career as a fiction author, Janet Asimov also continued to work as a psychiatrist and psychoanalyst.

Following her husband’s death, Janet Asimov continued to write, publishing Murder at the Galactic Writers’ Society and she edited, It’s Been a Good Life, a collection of excerpts from Isaac Asimov’s writings.

Former SFWA President Paul Levinson, who was friends with Janet Asimov, said, “One of the all-time greatest honors of my life was when Janet asked me to write a blurb for Isaac’s It’s Been A Good Life (2002), which Janet sagely and lovingly compiled.  I of course said yes.” 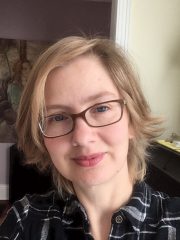