SFWA thanks Eleanor Wood and Spectrum Literary Agency for more than twenty years of service to the organization. Eleanor signed on as SFWA’s agent in 1997 after SFWA’s previous agent didn’t want the job anymore and was an immediate success, nearly doubling the advance for the next Nebula Award anthology. At the time, she was one of the last great agents to take a 10% commission, so SFWA (and the editor and contributors) received even more.  From the 1998 Nebulas in Santa Fe on, Eleanor delivered highly informative “State of the Publishing Industry” speeches, and was a fabulous source of publishing information that allowed SFWA members to better navigate the rapidly changing book world.

I still vividly remember how much Eleanor helped when SFWA’s auditor found a serious discrepancy in how Pocket Books was paying royalties for Star Trek books exported to the UK and Australia – they weren’t paying anything, contrary to the language in their boilerplate contract. SFWA complained to Pocket but was met with repeated demurrals; it was only when Eleanor took over that they capitulated, not only paying a fair compensation to all the authors affected, but getting the contract changed to more fairly pay authors in the future.

Over the years, in addition to selling the Nebula anthologies (soon to be called Nebula Award Showcases) every year like clockwork, Eleanor also managed to sell a three-volume anthology of Grand Masters’ work, a daring anthology of foreign writers in translation, and more, including reprints of the great SF Hall of Fame series. Royalties from foreign editions, classy hardcover reprints, and more started rolling in.

Although selling books to publishers is the glamorous part of a literary agent’s job, the part few think about is the computation and paying out of royalties to the individual contributors to anthologies, which can be ever more burdensome as the total amounts received from the publisher get smaller and smaller. Until recently, SFWA was not in a position to be able to do this reliably, and this makes us more than grateful for Eleanor’s willing to do this. The Nebula anthologies couldn’t have existed otherwise.

In short, we want to thank Eleanor for two decades plus of work with SFWA, which, owing to its volunteer nature and regular turn-over of officers, can often be frustrating. Agenting for a writers’ organization includes an obligation to uphold its values and SFWA greatly appreciates all she hasdone to help the organization advocate for and promote science fiction and fantasy writing. 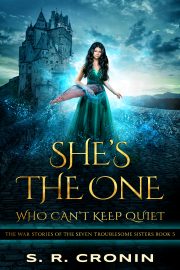 Celestine, the fifth of seven sisters, is the family beauty and a talented musician, but she hides her love for another woman beneath her public persona. She struggles to inspire her fellow citizens once she learns an invasion of her country looms.