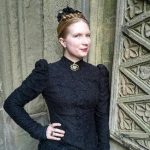 I’m often asked if my professional theatre and playwrighting background helps me as a fiction writer. It does in countless ways. Theatrical form, training, and structure are holistically integrated into how I see the world and operate as a storyteller. I adore diving deep into character, creating atmosphere, and ‘setting the stage’ for my novels. I became a traditionally published novelist many years after I’d established myself on stage and published as a playwright.

I teach a workshop called “Direct Your Book: Theatre Techniques Towards A Blockbuster Novel” about using theatrical concepts to invigorate, inspire, and problem-solve in fiction writing. Here’s what I’ve found to be the most consistently useful takeaways:

Physicality. One of my favorite aspects of character building when taking on a role is figuring out how they move; where their “center of gravity” is, whether the gut, the chest, or the head; what part of their body leads the way? Thinking about this can really ground you in the bodies of your characters and how they interact with their world.

Environment. I’m a licensed New York City tour guide and there’s really nothing like moving through the streets your characters move through and truly living in all those details. In my Spectral City series, I utilize many of the city’s most haunted paths as the routes my psychic medium heroine takes to navigate the city. Her noting the various haunts of the city creates a sort of ‘lived in’ feel to the prose and to her experiences as a psychic detective. There is something to be said sometimes for writing ‘what you know’. If at all possible, visiting a place that informs your world directly, or inspires it if your world is a secondary one, can add so much in detail and expansive sensory experience. You can pair the experience of walking and drinking in this environment by thinking of the characters’ physicality and qualities of movement as you do so.

Clothing. Even if it isn’t a period piece, clothing tells a lot about a world and how characters live in it. Every clothing choice is an act of world-building. If your work is historical or historically informed, I suggest spending time in clothing from the time period. Try to rent something or commission something you could walk, run, move, and interact in for a period of time that helps you understand how garments inform movement, posture, breathing, existing. These things change radically across class and area of the world. For my part, as most of my novels are set in the late 19th century, the most important gift the theatre gave my historical novels is a tactile reality and personal experience ‘existing’ in other time periods with which I can paint details. In the 19th century, for example, women could be wearing an average of 40 pounds of clothing and that significantly affects one’s daily life. Knowing what it is like to move, sit, prepare food, lift, climb stairs, walk, trot, run, seize, weep, laugh, recline, jump and collapse in a corset, bodice, bustle, petticoat, hat, layers, gloves, and other accessories–all of which I’ve personally experienced in various historical plays and presentations I’ve acted in–is vitally important to taking the reader physically as well as visually and emotionally through a character’s experience. It changes breathing, posture, and interactions with the environment and others in a core, defining way.

Pacing – Something a director will say often to their cast is “pick up the cues!” meaning quicken the pace, intensity, and directness of dialogue. It means really listen to your scene partner and be processing responses in real-time, not pausing to “think up” then “act” a reaction but to react genuinely out of a lived-in and vibrant moment. I’ve found just saying “pick up the cues” to myself as I’m writing means I’ll more likely attach action and dialogue together rather than interspersing too much internal monologue and getting emotionally side-tracked, or stopping the pace of the scene to describe an action of physicality I can be threading more actively through the dialogue instead. The deeper you’ve gotten to know your character, the more quickly you’ll be able to pick up those cues and create flow in your prose.

“What’s my Motivation?!” – This line gets tossed around as a joke, lampooning actors taking themselves too seriously, but I promise you that if you’re lost in a manuscript or if a scene just isn’t working, it may be because your characters have lost sight of what they’re trying to get out of the moment. Asking your characters to pinpoint what their motivation is in any given scene will sharpen stakes, intent, and pacing. After pinpointing motivation, the next question in theatre training is “How do I get what I want?” and that’s the next question your characters must answer for any given scene to be firing on all cylinders.

A Director’s Eye – I think one of the hardest things as a writer is to step back and be able to look objectively at your work. A good editor is a lot like a good theatre director, giving notes to sharpen the storytelling. But before you get to the editorial stage, if you and your critique partners are able to think about your story from a director’s eye, looking out for pacing, blocking (how the characters move within the scene), flow and strong choices, you might be able to pick out overarching issues a close line-by-line focus might not see. I like to think of revisions as changing a lens and changing focus so I’m looking for things I may not have caught the first time. A director has an eye on all the aspects I’ve outlined above, so give yourself permission to take in the whole picture of your novel and give yourself notes like you might critique an actor or scene designer, in hopes of creating a more vibrant chapter.

Blessings and Break a Leg!

Leanna Renee Hieber – Actress, Playwright, Ghost Tour Guide with Boroughs of the Dead, and award-winning, bestselling author of The Strangely Beautiful saga, the Eterna Files and Magic Most Foul trilogies and The Spectral City series. She tours a one-woman theatrical presentation “By the Light of Tiffany: A Meeting with Clara Driscoll” about the brilliant 19th century designer of Louis Comfort Tiffany’s stained-glass lamps. A proud member of performer unions Actors Equity and SAG-AFTRA as well as The Dramatist’s Guild, Leanna has published short plays and has worked extensively in film and television, featured on shows like Boardwalk Empire and Mysteries at the Museum.