Surely, nothing screams sexy like a bisexual+ woman asking, “How does it feel to kill someone?” Cue the eye roll. Sharon Stone’s persona in Basic Instinct depicts an openly bisexual+ character who is revealed as a violent, sex-craving psychopath, and is just one of the many cases of harmful tropes that bombard the bi+ community (bisexual, pansexual, fluid, etc.). Despite the slight rise in minority representation, several works of fiction have been unrelenting in their use of a bi+ character as their  expendable scapegoat. Not only are members of the bi+ community subjected to numerous negative clichés, but they are often assimilated into the gay/lesbian or straight category based on the gender of their most recent partner. This tendency to bury bisexuality deeper than the Mines of Moria has gained notice from even the larger entertainment production studios. An article on CBS recently commented that “[i]n 2020…while television and film have often pushed boundaries on stories surrounding gay and lesbian individuals, experts say bisexuality has often been left behind.”

This is partly explained by the fact that bi+ individuals can face misrepresentation from even within their own communities, as Ilana Masad wrote in an article for them. magazine.  “Even though bisexuals comprise nearly 50 percent of the LGBTQIA+ community, as noted in 2011 from the Williams Institute’s research at the UCLA School of Law, many assimilate them into an alternate category before considering the possibilities.” Masad continues to point out that “[o]ne big misconception is that bisexual folks just can’t make up our minds; another is that we’re greedy. Yet another…is that bisexuals are re-enforcing the gender binary.” This stems from the idea that bisexuality excludes trans individuals, which is not the case.

With so many misconceptions wailing in from all sides, bi+ characters are constantly slotted as the undesirable or expendable targets in fiction.

Unfortunately, these misunderstandings are nothing new for the bi+ community. The “greedy” attribute is linked to a constant theme referred to as triangulation. Robyn Ochs, a well-known writer and activist in the bi+ community, explains triangulation as “accompanied by jealousy and the fracturing of one relationship for another. The bisexual person is usually located at the triangle’s apex.” So, before deciding if a novel requires a bi+ character, perhaps solidify why this quality appeals to you. What goal is achieved by granting them this preference? An excellent example of including a bi+ character without drowning them in negative connotations is in Annie-Marie McLemore’s fantasy novel, Wild Beauty. “There was no way to tell their mothers the truth and make them believe it, that hearts that loved boys and girls were no more reckless or easily won than any other heart. They loved who they loved.”

With that said, one of the best ways to ensure accurate representation starts with research. The Bi-bliography database offers a variety of written works of fiction, non-fiction, and poetry that include bisexual+ characters as the main or significant supporting roles. Many writers have heard the phrase “read what you want to write,” and as such, this database offers a multitude of literary works and personal accounts of bi+ individuals that can be utilized to broaden their understanding of bisexuality.

So, how do we avoid another Basic Instincts fiasco? Start by remembering all the people with heroes and good role models, then determine if your bisexual+ character is there to “shock and awe,” or to offer the same depth and diversity to your world as our real one. Robyn Ochs once stated that “[l]abels are tools, which help us to describe ourselves to ourselves as well as to others. They are not fixed and unchanging essences. The reality is that each of us is unique.” So are your characters, and they deserve to be treated as such. 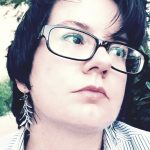 C.K. Larsen is a bi+ fantasy writer with a debut novel, Theme Song Panic, available on Amazon and Kindle Unlimited. They’ve won awards in the On My Own Time Awards with the DFW Business Council of Arts and with the SFF category of the Writers’ League of Texas Manuscript Contest. Check out more at: ck-larsen.com.