If you are a writer and an avid Twitter user, you may be familiar with the term #OwnVoices and pitch events such as #PitMad and #DVPit. There is some measure of controversy in the writing community regarding the use of the #OwnVoices qualifier. The term was originally coined by writer Corinne Duyvis, and it denotes that a person from an underrepresented background is writing characters from a similar shared experience (as opposed to writing characters with a different background than what they know personally).

One of the issues of controversy is that editors and literary agents have placed a public cry for more stories that fall within this spectrum, asking for writers to self-identify that they hail from such a background and disclose which applies.

Recently a great deal of attention has been placed on a specific group of marginalized individuals: the neuro-diverse (ND). ND is defined as having a brain that is wired differently from the neuro-typical (NT) experience. Under the umbrella of ND, you can find the following, such as Autism, ADHD, OCD, giftedness, Learning Disabilities, Synesthesia, and Tourette Syndrome, among others.

Readers may ask, why is it so important that ND creators make content with ND characters? Well, take a look at popular media that features the neuro-diverse that isn’t #OwnVoices.

An infamous recent example is Music (2021 film), co-written and directed by singer-songwriter Sia. The film features a non-speaking Autistic main character named Music (played by Maddie Ziegler) and centers on events in her life, how she is treated by her community. The role is portrayed by a neuro-typical actor, and Autistic individuals weren’t consulted in writing the screenplay. Teo Bugbee with The New York Times said, “The pop star Sia’s feature directorial debut, about an autistic teenager, at times seems indistinguishable from mockery.” The most significant criticism from the Autistic community regards the use of restraints, which is condemned due to the psychological and potential physical trauma, or even death, that can result from the practice.

One trend in books is for a character to be “coded” as Autistic, that is, displaying qualities or traits of Autism without the word explicitly being said. At times, it can seem like the word Autism is treated like the word “zombies” in George Romero films. This can feel like “queerbaiting,” the marketing strategy of giving the impression that a character is non-heteronormative but never actually portraying them in the hinted relationships, for ND readers.

The overall absence of ND main characters that are openly labeled as Autistic is at times distressing in and of itself. When Finding S.A.M. (a middle grade novel about a boy dealing with the “burden” of having an Autistic brother, initially slated for publishing by One Elm Books in spring 2021) came into the public eye on Twitter  in November 2020, the danger of harmful representation came to light. It was not written by an ND author. Early readers found significant and hurtful issues with the language and reactions within the story in treatment of the Autistic character. The outcry from the Autistic community was so fierce that the publisher pulled the book.

An example that is most often cited as “good representation” is the classic film Rain Man (1988), about an Autistic “savant” (played by Dustin Hoffman) and his brother (played by Tom Cruise). While the movie did bring Autism into focus, it also reinforced and deeply entrenched a stereotype about how Autistic people present to others. That perspective continues to impede diagnosis in non-white, non-cis, non-male, non-heteronormative individuals today.

Popular television series such as Atypical, The Good Doctor, and The Big Bang Theory create a very narrow definition of how ND looks. And in each of these instances, the media and messaging is largely created by NT writers and portrayed by NT actors. This narrow definition of neurodiversity from the perspective of NT people denies ND people a chance to see themselves authentically represented.

When NT writers co-opt stories about the ND, and NT industry professionals fail to give ND stories written by ND creators the chance to shine, we’ve lost another opportunity to reframe the narrative to something by us and for us. When those professionals fail to put their money and marketing behind intellectual property that is authentic and empowering, more is done than perpetuating stereotypes and making the world a much smaller-seeming place. For example, if you demonstrate that restraints are common and encouraged with Autistic folk, you are potentially putting lives at risk. If you push the joke that “everyone has a little OCD,” you make it harder for people with OCD to receive accommodations when they need them. When NT writers turn us into a punchline, we just get punched.

As was seen with Finding S.A.M., the reader does have the power to create change within the industry. Demand diverse books, support ND creators, buy their work when it is available, do so openly and proudly, and the publishing industry will follow suit. ND creators getting their art and vision into the public eye is a de facto solution. Yet, there are still significant barriers to publishing that are unique to the ND experience that will be discussed in the next part of this series, and both solutions and how to measure progress will be explored in a third installment.

Part 2: ND Difficulties in the Business of Publishing 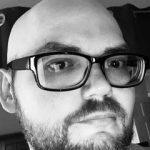 Matthew Broberg-Moffitt is a writer of kidlit and non-fiction, with bylines in Thinknum Media. He contracts as a Sensitivity and Expert Reader with Salt and Sage Books. The majority of his projects are inspired by his experiences in life with homelessness, Autism, and chronic rare illness. He’s a classically trained chef, former substance abuse counselor, erstwhile computer repair tech, and one-time Buddhist monk. His fiction projects are represented by Hannah VanVels with Belcastro Agency. His non-fiction projects are represented by Heather Cashman with Storm Literary Agency.

Matthew has a son in college, and frequently hears, “How do you have a child that’s college age?” He is surrounded by a number of cats that don’t belong to him, but try telling them that. His hobby is collecting hobbies. He currently lives in Oklahoma City, OK.