With the release of Cyberpunk 2077 a few months back, there has been some debate about what it means to be cyberpunk, and how that genre should be executed. As someone making a response game called Eyewear Cleaner 2077, I thought I’d throw in my two cents. In a world of free data exchange and rampant capitalism, how on earth do you write effective cyberpunk?

To be cyberpunk is to be in the underbelly of a harsh, computerized society and to live in a reality where unimaginable technological futures are thoroughly mundane. “High tech, low life,” as cyberpunk writer Bruce Sterling said.

To be a cyberpunk is to be a person who differs from the norm, and uses technology to change the world around them. You don’t have to be a good person to be a cyberpunk. The first short story of the genre, after all,  is about a hacker stealing money and rebelling against his parents (Bruce Bethke’s “Cyberpunk” (1983)). This genre and its technology breeds villains and antiheroes more often than heroes. But these are some general qualifiers of the genre.

Next, we should look toward the future to comment on the present. Cyberpunk authors of the past looked at their reality, and imagined a technological future for their fiction. Now that the future they predicted has come to pass, we too need to look around at the present day, and then look forward to what’s coming next in our reality.

Writing about present events through a cyberpunk lens means discussing a technological future where capitalism has reached extreme levels, and technology and capitalism are tightly wound together. Consumption of products, body augmentations, greedy businesses—cyberpunk has it all. Many aspects of our modern world fit into the cyberpunk lens. For example, many corporations depend on gig workers while at the same time exploiting them with low wages. Robotic processes replace human workers on the factory line, resulting in fewer available jobs, but cheaper production for companies, and plenty of workers face a market where they are rendered obsolete. The more technology does for us, the tighter it’s bound to capitalism, the greater the divide between classes and the darker the underbelly. This is where cyberpunk gets its characters–those who fall through the cracks and those who live in the underbelly. The gig worker who rises up against their job, or tries to do their best despite the capitalist systems oppressing them, is cyberpunk.

William Gibson, one of the fathers of the cyberpunk genre, said “I’ve never felt that I was quite [talking about the future in my works]—I’m writing about the present.” 1 To write effective cyberpunk, you have to both capture the cyberpunk aspects of your present reality, and imagine what future technology will look like. Take the gig employment example from above. What will Uber and Deliveroo turn into in fifty years? A hundred? Ten? What’s the worst that could happen, and how would we end up there?

This last part is optional, but if you want to write cyberpunk, I suggest looking forward to a better tomorrow. Most cyberpunk stories are dystopias, depicting realities that are harsh and bleak, particularly for the lower classes of society, and those who don’t fit in the “white capitalist” category. But even in these worlds, people still live, and there is joy to be found.

How can we write cyberpunk stories that uplift both their readers and their characters, even in the face of terrifying futures? How can we create hopepunk?

Hopepunk, according to its creator Alexandra Rowland, is a genre about “standing up and fighting for what you believe in. It’s about standing up for other people. It’s about DEMANDING a better, kinder world, and truly believing that we can get there if we care about each other as hard as we possibly can, with every drop of power in our little hearts.” 2 That gig worker fighting to make a better world despite all the opposition against them? That’s hopepunk.

Cyberpunk is often a bleak genre, full of oppressed peoples and terrible societies. How can we use the genre to discuss the good in the world rather than just the bad? How can we do more than reproduce the tropes of hopelessness found in past cyberpunk stories, creating our own tales that bring light to this world? How do we survive dark times now, and how will that change in the future? Instead of assuming a worst case scenario for our future gig employee, what could happen in the best case? How do oppressed workers in our present survive their capitalist society, and how will that response change as technology evolves?

With this in mind, go forth and write cyberpunk—or, even better, be cyberpunk. 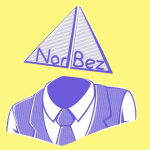 Naomi Norbez, aka Bez (he/they) is a writer and game maker from New Jersey.  When he’s not binge-watching The Good Place, he’s creating new interactive fictions, reading, or writing fanfic (again).  His latest release is Eyewear Cleaner 2077, a response game to Cyberpunk 2077.  You can follow them on Twitter @NaomiNorbez.