There comes a point in every writer’s life when they stare at the page and realize the story is getting the better of them. An evil voice whispers that maybe they’re not good enough. They realize that in order to tell the story, they need to become a better writer.

Luckily for those writers, there are books, courses, workshops, programs, degrees, all of which will provide you skills, ideas, communities, and prestige to get them over your hurdle. Maybe. Possibly. The idea that a writer may come to a place in their professional career and require deeper knowledge is valid, but the idea that they must be taught is interesting.

What if we (let’s be honest, I’ve been right there) have already done the courses, read the books, have a great writer’s group, and feel like we’ve plateaued? How do we get better, deeper skills, so that we can write better, deeper stories?

That idea is sort of scary. What do we know about writing?

We’re trying to Level Up!

But what sometimes happens when we’ve reached this place is that rather than growing up we would be best served by growing out and shifting our perspective.

There’s an idea that teaching is the last refuge of the failed artist. This is untrue. As a writer, we are constantly thinking and growing and building. The mindset of a teacher allows the writer to look at work analytically, to consider the craft as well as the art, and through that analysis, hone and develop their skills. The two go hand-in-hand.

For example, one of my favorite lines in Arkady Martine’s A Memory Called Empire is at the climax. It goes like this: “Released, I am a spear in the hands of the sun.” As a writer, I appreciate the language choice. It’s evocative, and fits into the overall arc of the story. It’s also a metaphor. The character isn’t turning into a spear, and the sun doesn’t actually have hands. That bit is personification. As a reader, we read the words, have an emotional response, and keep rolling. A Memory Called Empire is exceptional.

But as writers, we have the opportunity to appreciate it differently. And if we were to teach this single sentence, to another person, to a class, a workshop, or a patient friend, our understanding of it must deepen in order to explain it to someone else.

How about something like dialogue? For me, it took a patient teacher well into a graduate program to let me know that I was punctuating it incorrectly. It took looking at examples to understand and learn what I’d done wrong.

One place that I go back to for dialogue is Ellen Kushner’s The Privilege of the Sword, where the protagonist is drugged and overhears a conversation between her mentor and his lover. It flows flawlessly, but understanding how and why becomes the skill:

“What about her.” I dreamed them saying it.

I opened my eyes to show I was not asleep, but all I could see was red fire; I was still in the heart of the fire.

Here we can see that the period in the first piece of dialogue separates the next sentence. In the last line, we have a semicolon (the bane of existence for many writers) linking two independent clauses. But we as readers can understand that they’re two ideas juxtaposed together. If we have to explain joined independent clauses, suddenly our toolset grows.

Rebecca Roanhorse’s “Welcome to Your Authentic Indian Experience” is a place where you can look at beginnings. Look at it, and how would you explain what’s going on in it? By learning the words for it, by understanding the what and the why, by teaching it and explaining it, our skills grow:

You maintain a menu of a half dozen Experiences on your digital blackboard, but Vision Quest is the one the Tourists choose the most.

In this opening line, she’s breaking the fourth wall, and speaking to the reader. It’s also a description and sets the scene. It’s worldbuilding.

Ilona Andrews writes a killer (pun intended) fight scene. Look at what’s going on in this small exchange from the novella Sweep of the Blade:

If we had to explain it (to teach it) we’d perhaps think about the laconic language. The word choice is crisp and clear. The sentences (syntax) are short. The word choice at the end is not terribly specific, but conveys the motion without slowing down the rising action and the tension of the scene.

The reality is that there are many writers at varying levels of fame and acclaim who are teaching workshops and classes and writing books, because teaching has value. If teaching were really the province of failed artists, would Stephen King have written a book dedicated to writing? Things to think about. 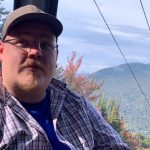 Sean Robinson is a speculative fiction writer and educator who lives in the Upper Valley of New Hampshire. You can find him online (occasionally) @Kesterian.