Publishing (verb): the act of smashing your head against a wall until you see daylight.

Publishing From Outside America (verb): as above, at long range.

In the aftermath of CoNZealand, the 78th Worldcon, there was a palpable feeling of betrayal in the New Zealand SF/F community. People talked about the “once in a lifetime opportunity” that had just been blown, how for many of us it was our only shot at publication, and it had fallen to pieces before our eyes. After the winning bid, there had been endless complaints that New Zealand was too far away and inaccessible, that regulars couldn’t attend; few seemed to consider how it also went the other way—an economy class flight to the US from New Zealand is anywhere between $3,000 and $10,000 and for many creators and fans in New Zealand, it was going to be our first and only WorldCon.

It wasn’t the panels that Kiwis were excited about, it wasn’t the Hugo Awards, it was that the Americans were going to be here, including editors, agents, publishers—the gatekeepers of the industry. SF/F publishing in New Zealand is restricted almost entirely to micropresses, and it’s near-impossible to get arts funding for genre fiction: if you want to make a living, you need to sell in the US. That means engaging with US agents, US publishers, and US readers, who are all a literal ocean away. The opportunity to meet them face to face, to shake their hands, to start properly building the networks that define this industry, was taken from us. We had one opportunity to be seen and because of a cascade of problems on top of a global pandemic, it fell apart.

I got lucky: coasting on adrenaline from my first big awards win, I just started charging into random Discord rooms and digitally shaking every hand I could. I don’t remember much, but I shouted about my favorite birds a lot, and then two weeks later my inbox exploded. Oh yes please send me a query, remind me we spoke in the subject line/Come join our writing group, I’ll send you a Slack invite!/if you talk to my agent, tell her I sent you. In less than a week, I made more headway in my publishing career than in 10 years of emails. You don’t have access to US cons and festivals, to US workshops and college courses, that means you don’t have access to Americans.

You don’t realize how hard the digital divide is to bridge until you’ve been on the wrong side of it. Publishing is so often an industry of personal connections, and they’re that much harder to build if you’re never in the same social spaces as the people you need to network with. If agents and publishers are serious about building a stable of writers from outside the US, they need to acknowledge this problem and start figuring out how to handle it.

We also don’t really have our own cons, our own festivals, our own workshops or courses. There’s no real career track for getting attention: it’s go American or go broke. Clarion South ran in Brisbane from 2004–2009, and its graduates speak well of it, but it’s been over a decade since any major SF/F workshop existed in a location easily affordable for Kiwi authors—even cheap flights to the US can cost in excess of $3,000, and if current quarantine measures continue into 2021 you can throw another $3,000 in managed isolation costs on top of that. You have to go digital, and going only digital is like cranking the difficulty of an already difficult game through the ceiling.

Here’s a fun question for American authors: have you ever had a piece rejected from a magazine because they’ve already got an American in the issue?

“[…] one fairly prominent semipro magazine once rejected me with ‘we really enjoyed this but we already had a New Zealand story solicited for this issue.’ I don’t know if I’ve ever heard of a publication saying they’re sorry but they already had one story by an American this issue so they couldn’t sign any others. How New Zealandy does a story have to be in order to be too New Zealandy to be featured alongside another story from New Zealand? Set there? Dealing with our culture and concepts? Or is two authors simply being from there too much? But you never hear anyone complain about too many stories being set in New York or London.” —Casey Lucas

This isn’t a common occurrence, but it’s not the first time I’ve heard it, either. There are so few opportunities for us in this industry, and it’s devastating to lose one for a reason that I cannot in good conscience call anything other than bullshit.

And while I can only speak from a New Zealand perspective, I’ve heard similar stories from authors all over the world. Authors from Malaysia, authors from Scotland, authors from Nigeria—there is a whole world of SF/F that is being under-served by a publishing infrastructure that is almost entirely based in the US. Darusha Wehm sat down and worked out the numbers in 2016 and found that American authors are overrepresented in US-based awards (79% of the Nebula shortlist, 82% of the Hugo for novel, and 74.5% of the Hugos for short fiction), but they also constitute a significant number of nominees in Arthur C. Clarke Award and British Fantasy Award, both ostensibly for UK authors.

So what do we do?

Well, we start with acknowledging and understanding it. A large part of the problem is US publishing professionals underestimating how vast the digital gulf is—I think editors would be less likely to reply “we love it but we’ve already got one” if they realized how much it was impoverishing SF/F as a whole. There’s no evil scheme to lock out the rest of the world, it just sort of happens because it’s being allowed to happen.

On a more institutional level, we need more scholarship and funding opportunities for international authors to help offset the significant additional costs of getting to the US. I’m not sure how viable this is in our cursed plague year of 2020, but it’s something to start planning now for the future.

On a more individual level, I’ve found the Slack channels and Discord servers that undergird our industry to be massively useful, but getting into them tends to be invite only, and you only get those invites if you know people personally. How do you get to know people? Well, right now, by meeting them at cons and workshops. I only got them because I spent CoNZealand being social, but that was a rare window that won’t open again. In a hundred little ways, authors from outside the US just don’t have the same opportunities.

There’s a dark side to that as well: NZ authors I’ve spoken to have said because they’re not part of US whisper networks, they can be unaware of predators when attending events in the US; one author told me they can afford to attend US conventions but avoids them for safety reasons. We need more international communication and community, both to help amplify underrepresented voices but also to keep our fellow authors safe. If you’re a US writer or publishing professional, be aware of the broader international community and take steps to bring it into your own.

There is of course work that can be done on local levels (it’s hardly the US’s fault), but North America has access to economies of scale that other parts of the world just don’t, and for the time being it is the center of the SF/F world. I wouldn’t be where I was in my career without the generosity of North American authors, agents, publishers and other industry professionals, but I got extraordinarily lucky. I’m still trying to grapple with the fact that so much of my success is because I blundered into a random Discord room at CoNZealand and Amal El-Mohtar was talking to my old favorite law professor; I don’t think that’s something that’s going to be replicable for many other authors. The stars shouldn’t need to align for those of us outside Turtle Island to get a break. Americans have power and opportunities that those outside the continent don’t—if you have that power and you want to build a more diverse and equitable industry, you need to think about how best to use it. 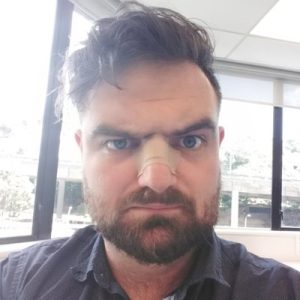 Sascha Stronach is an author, editor, and poet based in Pōneke, New Zealand. They are of Greek and Kāi Tahu Māori descent and also probably a little goblin. After training in bareknuckle underground webfiction deathmatches for close to a decade, they released their debut novel The Dawnhounds, which is about LGBT+ warlock pirates fighting the cops, and won the 2020 Sir Julius Vogel Award for Best Novel. In their spare time they can be found in the woods, creating bizarre aggregates of sticks and dirt which hum with strange possibility.