Writing flash fiction—commonly defined as a story of no more than 1,000 or 1,500 words—can seem daunting at first try. Or addictive if you’ve already caught the flash-writing bug. These tips are based on my love for flash as a reader and writer, and I want to emphasize that they are tips, not rules, because the beauty of flash is how much you can play around with it.

Titles can be hard, but they can also do a lot of work for you. They can anchor your story in a specific time and place and do some worldbuilding (in addition to hooking a reader). For example, a title like “How I Survived the Alien Invasion on Ganymede,” does some serious worldbuilding before your story even starts.

A great opening line is always nice, but when you have fewer words to tell your story, a strong opening is even more important. This doesn’t mean your story has to start in medias res with an action scene, but I try for openings that are intriguing in style, voice, or content while revealing something interesting about character, plot, setting, or (best of all) all three.

Writing flash is a great way to practice giving readers just enough world building while avoiding both long-winded info-dumps and being too cryptic and obtuse. This can be challenging when writing speculative flash, but one of my favorite ways to do it is by using descriptions. Referring to something as “the dragon-burned city,” or “the android kingdom of Mars” says a lot with few words.

If I have trouble with a story’s word count, one of the first places I look is the number of characters. Each character requires some form of introduction or description, usually in addition to dialogue and actions, so it’s useful to consider how many characters your story really needs.

It’s easy to use a lot of words on dialogue (and dialogue tags). Some great flash stories are nothing but dialogue, so I’m not saying “no dialogue”! But if you’re struggling with word count, it might be a good place to start whittling.

Some stories flow naturally into flash size as you write them (and it does get easier with practice), but some stories must be whittled down to size. That does not mean your story has to be terse or shorn of beautiful prose. Flash readily lends itself to evocative and lyrical language. One way to figure out where to whittle is to scrutinize the beginning and end of your story. What is essential to get the reader from A to B, and what is essential for your story to keep the voice and style you want? Often, you need less than you think.

Flash is a great place for epistolary fiction. Writing your flash story in the form of letters, text messages, diary entries, online chats, lists, and so on can help you condense your story while still making it both engaging and compelling.

By its very nature, flash lends itself to stories that capture contained moments in space and time, but a flash story doesn’t have to be small in scope. I sometimes think of flash as zooming in on a specific aspect of a bigger world, where some things fall outside the frame. You can zoom in on a character, an emotional conundrum, a dramatic moment. But you can also tell an epic story (in miniature) that covers a lot of space and time—the rise and fall of a galactic empire, or a relationship—while smaller details blur into the background.

One of my favorite literary devices in flash is the circle-back ending: where you revisit a sentence, or sentiment from the beginning of your story at the end, illuminating it in a different light. And of course, there are the twists. My favorite kind of twist is when a story seems to be about one thing, until you realize it was about something else all along. A twist is most effective if hidden in plain sight in the text, not a random, deus-ex-machina rabbit pulled out of a hat. When writing a twist-story, I often think of it as two stories: the story I’m really telling, and the story I want the reader to think I’m telling.

Flash is the perfect place to play around with your writing. Try something you haven’t tried before: a new style, format, or point of view. Writing flash has helped me get out of the creative doldrums many times, and I hope it can do the same for others. 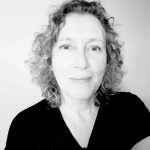 Maria Haskins is a Swedish-Canadian writer and reviewer of speculative fiction. She currently lives just outside Vancouver with a husband, two kids, a snake, several birds, and a very large black dog.

Her short story collection Six Dreams About the Train is out now from Trepidatio Publishing. Maria’s work has appeared in The Best Horror of the Year Volume 13, Strange Horizons, Black Static, Interzone, Fireside, Beneath Ceaseless Skies, Flash Fiction Online, Mythic Delirium, Shimmer, Cast of Wonders, and elsewhere. Find out more on her website, mariahaskins.com, or follow her on Twitter @mariahaskins.