In the second century A.D., Lucian of Samosata wrote A True Story, a tale of space trips and alien life-forms. His first language was Syriac, but to reach the people of Athens, he wrote the tale in Attic Greek. Since then (and probably before), speculative fiction has been written by exophonic(1) writers from all corners of the world. Neil Clarke’s data for the Clarkesworld slush pile indicates a 112% increase between 2008 and 2021 in international submissions. Publications like Future Science Fiction Digest expressly seek stories from non-native English speakers, and magazines like Eita!, Constelación, and Samovar offer work in both their original and translated tongues.

But what does it mean to write professionally in English from a non-native context?

When I started writing in English half a decade ago, I encountered two types of challenges: One is what I call “mechanical,” and the other is “cultural.” Mechanical challenges can eventually be overcome with the usual mix of time, practice, and lots of reading. Cultural challenges, though, don’t depend entirely on the writer. They pertain to the difference between what you seek to convey and what readers and editors will perceive from what you wrote, based on expectations set before they read your work, by their worldviews, and cultural backgrounds.

Mechanical challenges relate to which tools you have at your disposal in your craft. Translation is the art of picking a story and rebuilding it with different tools. Writing in a non-native language involves discovering which tools you need and how to position all the story’s pieces without a shared frame of reference.

Take the definite article the, which is the most frequent word in English. It’s inflexible in number, gender, and case, so the writer from a Romance-language context doesn’t need to worry about inflecting the article. Its use is almost instinctive in Romance languages, yet determining if an object needs the word at all is not always straightforward. What if the writer’s mother tongue has no articles, as is the case for some families of Slavic, Baltic, and Indo-Aryan languages? Writing in English presents different hardships for the writer who natively speaks Portuguese than for the writer who speaks Lithuanian.

Which brings us to fluidity and comprehension: the heartwood of fiction. A story must have fluidity, which in turn affects pace, and ultimately narrative enjoyment. Chances are that a reader won’t be pleased to enter into a clunky adventure filled with strange word choices, so the exophonic writer must worry about sentence-level flow. The natural rhythm of all our languages differs greatly.

Then we come to the cultural challenges of being an exophonic writer. Portuguese has a range of expressions and ideas that can’t easily be conveyed in English. One famous case is the word saudades, which means a deep state of longing or missing someone, heavy with nostalgia or melancholy. When writing in English, Portuguese-language writers also lose their diminutives. For example, little shell is less powerful than conchinha. The meaning of a diminutive-form noun can be literal, but it also can convey senses of affection or childishness, or show up when cuddling a loved one. It can even be the name of a pet. In dialogue, diminutives bring characters and relationships to life in a way that English cannot match.

When it comes to narrative expectations, exophonic writers are again at a disadvantage. Many readers want the same kind of agency, structure, and themes they find in stories by English-speaking writers. But stories are told in thousands of ways depending on where (and how) you live, and which language you speak natively. Not infrequently, this causes a clash of expectations between writers and editors/readers. The three-act story structure is not as attractive in Brazilian or Portuguese literature and having an active protagonist is not as relevant when you’re not writing from a position of privilege or power. Simply surviving or “inactive” protagonists are the rule, not the exception, for many stories written by minorities, including exophonic writers.

Like Lucian, who wrote in Greek because Athenians didn’t understand Syriac, many exophonic writers turn to English today because it is an imperial language. That comes with a price, but rising to its challenges undeniably brings the SFF community closer together.

(1) Exophony is the practice of (normally creative) writing in a language that is not one’s mother tongue. “Exophony,” Wikipedia website, last edited October 31, 2021. 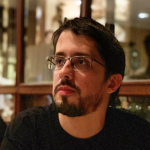 Renan Bernardo is a science fiction and fantasy writer from Rio de Janeiro, Brazil. His fiction appeared or is forthcoming in Apex Magazine, Podcastle, Dark Matter Magazine, Daily Science Fiction, Translunar Travelers Lounge, Solarpunk Magazine, and other places. He was one of the selected for the 2021 Imagine 2200 climate fiction contest with his story “When It’s Time to Harvest.” In Brazil, he was a finalist for the 2020 Odisseia Award and the 2020 Argos Award, two of the most important Brazilian SFF awards. He’s also published multiple stories in Portuguese and other languages.

He’s also a full SFWA member and can be found at Twitter (@RenanBernardo) and his website: www.renanbernardo.com.