We think of humor as something that just … happens. Yet, as someone who writes both humor and fiction, I’ve learned that each is a distinct craft with challenges that can multiply when combined—not unlike when Ray, Peter, Winston, and Egon cross the streams in Ghostbusters, risking total protonic reversal. Okay, maybe it’s not like that. But it would be funny if it were.

Fairly or unfairly, the general public doesn’t associate science fiction and fantasy (SFF) with hilarity. In fact, a recent fake survey revealed that 72% of readers expected these novels to be “Moby-Dick in space … (or the moors or wherever).” However, what is humor if not an observant reimagining of the familiar, typically with some kind of an unexpected twist? Writers of SFF create ten interesting twists before their well-observed breakfasts. So, why aren’t our bookshelves and our zeitgeists chock-full of hilarious SFF novels?

My guess is that SFF writers already feel overwhelmed. Not only do they face the challenges of any novel—including character development, plot, point of view, and so on—but also the mandate to build worlds for characters to inhabit and confront. I think writers suffer from knee-knocking fear of the additional layer of “trying” to be funny. A corny novel that makes readers groan may erode their suspension of disbelief. All that work for nothing!

For novelists who do wish to let their funny flags fly, below are some principles that’ll help:

(1) The humor has to grow from the characters, not from you. While it might be hilarious to make characters do all sorts of things—play songs from Cats on the harmonica, juggle hard-boiled eggs, take Bob Dole to the school dance—these have to be the character’s choices, not yours. Trying to “make” funny things happen is a form of deus ex machina, a Latin translation of a Greek concept known as “god in the machine.” In Greek tragedies, plots were sometimes resolved when the backstage crew rolled out a god strapped to a crane who would fix seemingly unsolvable problems. A magical deity in a crotch harness is not a “good” surprise in a story. Funny, but not the right kind of funny.

Instead, channel real people who make you laugh. Funny people tend to view life through a slightly different lens. Perspective is a tool that’s very much available to a fiction writer. By filtering action through a character, you keep humor in-world rather than impose it. For example, Martha Wells’s Murderbot offers us an askew perspective that lends itself well to humor. The key is to ensure the perspective is consistent and nuanced, just as it would be in a real person.

Bonus! Filtering humor through characters helps the subjectivity problem. Is hilarity in the eye of the beholder? Absolutely! Readers may or may not laugh. If the beholders with whom you concern yourself are the characters, it won’t matter. The humor will be, well, a bonus.

(2) In comedy writing, a well-known mantra is “Punch up, not down,” meaning jokes should be at the expense of the most privileged in society, not the least. An otherworldly story is bound to reflect our own society’s values. So, in the revision process, imagine whether all readers can laugh at the story—people of different backgrounds, races, abilities, genders, etc. There’s obviously a degree of subjectivity here, too, but we can try our best, perhaps consulting a variety of beta readers.

(3) Tap into the setting. If you set up a place vividly, readers will likely accept it, no matter how weird it is. For example, the setting of Tyler Hayes’s The Imaginary Corpse is the “Stillreal,” a place where discarded ideas go when they’re too Real to disappear. It’s easy to anticipate humor from a world that personifies discarded ideas.

In Gil’s All Fright Diner by A. Lee Martinez, the source of comedy is a juxtaposition of ordinary (a struggling diner) and extraordinary (zombies, werewolves, a sorceress, etc). Another situation ripe for humor is almost the opposite of what Martinez devised—an odd setting and a main character with a run-of-the-mill perspective. Think of Arthur Dent in Hitchhiker’s Guide to the Galaxy.

Humor is difficult in fiction generally because it threatens to break the spell of the story—which is the writerly equivalent of crossing the streams, or as Egon explains, “ … all life as you know it stopping instantaneously and every molecule in your body exploding at the speed of light.”

But you know, no pressure. Here’s the good news: Another recent fake study indicates that 99.9% of SFF writers are nearly as funny as they imagine, and they are totally up to the task! Our bookshelves need you. And who else are we gonna call? 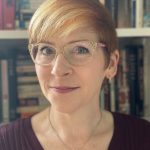 K.E. Flann has written for McSweeney’s, The Gettysburg Review, Weekly Humorist, The North American Review, and many other outlets. She’s the author of two awardwinning short story collections, a craft advice book, and the recently released humor book, How to Survive a Human Attack: A Guide for Werewolves, Mummies, Cyborgs, Ghosts, Nuclear Mutants, and Other Movie Monsters (Running Press/Hachette).