We tend to remember our first brushes with the imaginary vast: when we read our first children’s portal fantasy, were enchanted by the animated world of our first Studio Ghibli film, or got lost in our first strange, endless game map. As writers, we often want to bring our own readers there too—to the edge of something bigger than the story can hold.

For this purpose, one useful concept to consider is the numinous. The numinous was coined by religious scholar Rudolf Otto in his 1917 book The Idea of the Holy. Otto described an experience common to many religious traditions, beyond good or evil, of devastating wonder and mystery.

Otto was writing as a theologian, but his idea inspired Christian fantasy writer C.S. Lewis and many secular writers since. Chris Brawley’s Nature and the Numinous in Mythopoeic Fantasy Literature argues that “fantasy acts as a form of myth, which by its revisionist and subversive nature, allows the reader to experience a feeling of ‘awe.’” Building on Otto’s work, Brawley asserts this isn’t particular to any faith or indeed to a relationship with faith at all: it’s a craving for an experience that reshapes our relationship with the world.

It’s heady stuff, and when fantasy is your everyday reading material, streaming on your TV every night and flashing at you from mobile games, can you still dig into that vein of awe? Here are two thoughts to keep in mind:

1. Know whether you actually need it.

Sometimes a world that’s consistent, comprehensible, and manipulable is precisely what you want to write. There’s already a wealth of solid writing advice out there on making the supernatural as logical as possible, or at least knowable.

Many readers derive pleasure from stories built upon worlds that are knowable. Even outside of popular epic and urban fantasy—such as genre stalwart Brandon Sanderson, whose integrity to his own invented systems of magic serves as a promise to his readers—some genres and media tend to demand more consistency than others.

Puzzle games, role-playing games, and interactive fiction often promise the player certain reliable world “rules” to make interactivity possible and fair. Game writer Emily Short has written extensively on her blog about her creation of games like Counterfeit Monkey and Bronze and the necessity of knowable stakes. Fiction that riffs on RPGs and game worlds often builds on the promise of a (relatively) transparent structure.

2. Let your world humble your characters.

A classic element of adventure fiction is mastery—the ascension of a nobody to a hero, or at least to knowledge, power, and agency. A thriller protagonist typically turns the tables on a world that starts out pursuing them, while the detective in a mystery rearranges chaos into order to solve the story’s central puzzle. Romance traditionally requires the journey from isolation to wholehearted intimacy, as Gwen Hayes outlines in craft book Romancing the Beat.

Numinous fantasy can still very much contain elements of this—and often will, to create a satisfying story.

But a crucial element to transporting readers to a world of such infinite horizons is to remember that it should be infinite to your protagonists, too, at least in some ways. It’s not wrong for a fantasy protagonist to be humbled, to encounter beings and stories bigger than they can change or fully understand.

Susanna Clarke’s 2004 Jonathan Strange and Mr Norrell understands this principle very well. Clarke’s novel asks and answers many of its questions tightly, but the two titular deuteragonists are still left awestruck and humbled in the face of a god’s plan they only see the barest glimpse of. A chilling and breathtaking moment in the novel’s climax involves no more than a glimpse of the Raven King’s enormous, sky-blotting eye.

In Jonathan Strange and Mr Norrell, the Raven King’s mind is unknowable, including to the brilliant and arrogant main characters, who seek to understand it. But protagonists don’t have to fail in order to be smaller than their worlds: N.K. Jemisin’s The Hundred Thousand Kingdoms features protagonist Yeine ascending to godhood after taking a chained deity as a lover, but still inhabiting a world of incomprehensible scope. Nghi Vo’s Singing Hills novellas feature people tangling with—and succumbing to, in ways brutal and romantic—the divine as the chronicler Chih takes down their stories for their religious order of archivists. The structure of Chih’s frame tales hints at a world more sprawling and inexplicable than the story can contain.

Fantasy protagonists journey far—but when they find themselves at a shore they can’t cross, they touch the numinous. When they come back changed even by the glimpse alone, they bring readers with them, and leave them dreaming and imagining long after the last page. 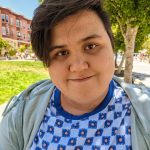 Gabriel Murray is a writer and instructional designer living in southern California. He creates fantasy and interactive fiction for adult and young adult audiences. His work has appeared in Clarkesworld, Strange Horizons, and We See A Different Frontier. His tuxedo cat Rocco has appeared in the hearts and minds of many admirers.