There’s significant power in fighting and kissing scenes. When done well, they’re often reader favorites. Look at how readers talk about stories with excellent fights or swoonworthy sex, and you’ll see them call out these scenes specifically. In books that bring violence and romance to the page well, readers may even praise them with the same words, using descriptors such as “powerful” and “heart-pounding” for both.

That’s because the commonalities between these scenes don’t stop at “readers love them.” If you have the craft skills to tackle a battle, you have the foundation for a romantic scene, too.

While nuance is always a factor, here are five ways fighting and kissing scenes are the same. Note: “Kissing” applies to any physically romantic scene for the purpose of this piece.

Fighting and kissing scenes are turning points. These are high-conflict chapters in your story. Whether you’ve built a romantic arc or have been setting the stage for a showdown, what happens in this scene will change everything. In a fight, someone will win or lose, there will be a toll, and the plot will move forward on a new path because of the scene.

The protagonist, regardless of if they win or lose, will see the world differently, looking at those who fought against them, and perhaps alongside them, in a new way. Seeing how someone handles their sword or handles death, how they counter fear or strength, changes things. Weapons and resources may have been lost or gained. The next battle will be different.

The same applies to romance. After that kiss, the relationship isn’t the same. The characters saw something new in one another, in their own feelings. They can no longer interact the same way they had before. They may be more closely bound or now experience awkwardness in the same room. Their choices to act on their feelings may impact others, and they can’t take it back. To that end…

Both types of scenes demonstrate relationships in a high-pressure way. Fighting and kissing scenes are catalysts for relationships. They offer the author the power to change how everyone is seen. The fearless leader may be exposed as a coward. Or the trusted confidant as a betrayer. But more than that, these scenes require characters to interact when emotions are running high—and often, the truth may be laid bare in the process. Running on adrenaline and emotion allows characters to speak their truth, demand more, and act without forethought. Use those emotional drivers to illustrate character conflict. Can the protagonist trust this person to cover their back in a fight? To guard their heart? These are bold questions with big consequences, and the way characters approach them in explosive scenes tells us much about who they are.

An emotional backbone elevates these scenes. When love or life is on the line, the big emotions are on display. Fear and hope. Greed and desire. The consequences of the scene resonate within the character, and those driving emotions can enrich the story and deepen the character arc.

Neither scene should focus on blocking. Readers care less about precise foot positions and every move of an elbow or a blade than they do about the action of being stabbed. The absolute same is true of a sex scene. “Part A touches Part B” reads like a how-to manual, and we aren’t writing those.

Ourstories give life to our characters, and while we want to describe the action, coupling the powerful external action with the internal emotional backbone charges the scene. Describing a roundhouse kick to the ribs—the bent knee, the rising motion, the power in the hips, the cracking connection—carries less of a punch than whipping that kick out to crush an opponent’s ribs and knowing the crunch means the character has time to rescue a fallen friend.

When it comes to romantic scenes, we see the same craft trick. Tucking hair behind the ear, the soft brush of a mouth, the tilt of the head, the pliant give of one set of lips beneath—describing all those actions may not fully immerse the reader in the scene. More important are the added layers of internal sparks, the heady rush upon contact, and the powder keg of  “I don’t know what I’m doing, but this could be something.”

Gratuitous can be fun! A cool fight scene can be delightful for both the reader and the writer. An epic, chapter-long swoon-fest can also be a very good time. While the craft elements that build powerful, plot-purposeful fighting and kissing scenes push your chapters to do more—move the character arcs forward, progress the plot—that doesn’t mean you ignore the good stuff. Pause and relish the teasing touches in the kiss. Take the time to use the found weapons in the alley in the middle of your street brawl.

Fighting and kissing scenes are packed with action and emotion. They can push your plot and character arcs forward rapidly, but they are also delicious candy for readers. When these scenes are done well, they grip readers and set them on a chase for another taste. 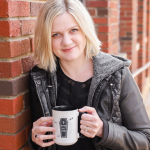 Chelsea Mueller writes gritty, twisty fantasy and thriller novels for adults and teens, including the critically acclaimed Soul Charmer series. She loves bad cover songs, good fight scenes, and every soapy YA drama Netflix can put in her queue. Chelsea lives in Texas and has been known to say y’all. For the latest updates, visit ChelseaMueller.com or follow @ChelseaVBC on Twitter and Instagram.