Because the romance genre is based on plot structure, it can easily be merged with a speculative fiction setting. Magical secondary worlds, alien planets, and far future empires can all include romantic relationships as the primary or secondary plot. One of my favorite romantic sub-genres is beauty and the beast, a very old story archetype popularized in Europe by French author Gabrielle-Suzanne Barbot de Villeneuve. The basic story type can be traced even further back to “Cupid and Psyche” (Greek) and “The Woman Who Married a Snake” (Indian). The core idea, being forced into an isolated situation where the goal is learning to live with a monstrous being, generates a compelling plot with built-in conflict.

In a recent Nature article, Sibylle Erle and Helen Handry discuss how monsters “disrupt and unsettle,” but also encourage readers to feel empathy. I would argue that it is almost a duty of romantic SFF to show how empathy can develop between wildly differing personalities; beauty and the beast provides a splendid canvas.

Speculative monstrousness can include aliens, supernatural beings, or artificial intelligences, as well as humans changed by magic. The couple’s isolation, whatever the reason for it, heightens narrative tension. Imagine a beauty and the beast trapped on an isolated mining asteroid, or in a decaying habitat deep beneath the sea. Imagine a beast constructed solely of energy or a beauty kidnapped by incomprehensible aliens.

Almost always in this story type, the monstrous character is paired with a more socially conventional character, their differences usually emphasized by a power imbalance between the two. Most commonly, the monstrous character is male, possibly because the origins of this story type reflect a common historical reality, inexperienced young women with minimal agency being given over to a husband’s family. Usually, the ostensibly less-powerful character “tames” the beast in that the true monstrousness of the beast character is behavior more than physical appearance. Monstrousness can also be entirely in the eye of the beholder or their society.

The joy of speculative fiction is that we can explore the core elements of beauty and the beast from different angles, whether metaphorical or literal.

Romance novels often address beauty and the beast pairings in a purely metaphorical sense; for example, Judith Ivory’s archetypal historical romance Beast. In her novel, the monstrousness of the hero is purely human misbehavior including male arrogance and entitlement; he must overcome this obstacle through learning communication and empathy, while the heroine, who has less social power, inhabits and must overcome some monstrous behavior of her own as she fights against her own social powerlessness.

In the literal sense, the paranormal romance sub-genre, as well as urban fantasy, frequently focuses on conflicts between vampires or werewolves and their human partners. Their isolation from others might be physical, or might be because the world at large does not believe in the existence of supernatural beings. The common trope of fated mates harks back to the forced relationship in beauty and the beast. Reversals of these tropes, or exploratory dialoguing with the structure of this sub-genre, is another way to explore the theme.

Writers are not limited by the prescriptions of earlier versions of this story, however. One can reconsider who or what is considered a beast and who or what is considered a beauty. Empathy might be developed by fictional science, such as telepathy. There are myriad ways to overcome disruptive “beastly” behavior—or not overcome it at all while still finding a solution. Beastliness can be embraced or revisualized as a form of self-discovery, or as a necessary oppositional force in society.

Does the beast need intervention or assistance from the beauty, or the reverse? Is becoming less beastly the appropriate goal for their setting? Is the solution to oppose a conformist, fascist society through disruption? Does remorse for beastliness lead to practicing restorative justice? Are, in a surprise twist, both characters beasts? What is the function of a beast, or a pair of beasts, in a utopian society? There’s no limit to the possibilities.

Romantic fiction might not save the world, but it can explore, model, and encourage potential empathetic solutions to problems, including problems we can’t see yet. And isn’t that the heart of speculative fiction? 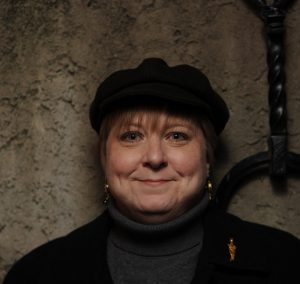 Victoria Janssen [she, her] is the author of the A Place of Refuge series from Kalikoi. She has been a reviewer for Publishers Weekly and was a regular writer for Macmillan’s Heroes and Heartbreakers. She published three novels with Harlequin and over thirty short stories in a long list of anthologies. She lives in Philadelphia. For a full list of her publications, please visit her website at victoriajanssen.com.