When I was a child, I snuck out to the backyard, made a little circle of stones, and jumped inside the circle. The goal was to get to Narnia, which I loved intensely. But I have never pictured Narnia or its characters in my mind.

I’m an aphant, that is, someone with aphantasia, the condition of lacking a mind’s eye, and with it, the ability to visualize. The term, coined in 2015 by Adam Zeman, has received much attention since.

Aphantasia is the inability to visualize familiar people and places, as well as things that don’t exist, the province of speculative literature. J. R. R. Tolkien writes of language’s inherent power to create fantasy. Even putting an unlikely adjective next to a noun—he gives us “the green sun” as his example—evokes a strange image that many can picture. However, I don’t see a green sun. I think of Green Eggs and Ham—an association, not an image. Reading enhances the mind’s eye for most people, but not for me. It sounds like a magic wardrobe in one’s brain.

Your gorgeous description of the spaceship or the landscape? Teenage me skimmed that paragraph like I skimmed Tolkien’s descriptions of Middle Earth. My head lacks a place for all those details to stick. I’ve tried. When Aslan asked Digory to look west and gave directions to the garden with the apple tree, that description seemed meaningless, a landscape beyond my grasp.

Despite these readerly challenges, The Chronicles of Narnia and The Lord of the Rings began my path as a medievalist, reader, and writer.

Today, diverse perspectives in speculative fiction are increasingly represented, including neurological diversity such as autism or synesthesia. Currently, I only see aphantasia in nonfiction, including interesting pieces by creative people who write whole worlds without visualizing them. I await characters with aphantasia: say, an aphant at a wizarding school learns to cast rich pictures in people’s minds, though not her own mind. I’m surely not the only one wanting such stories.

Many writers depend upon their mind’s eye; for example, C.S. Lewis’ process is highly visual: “All my seven Narnia books, and my three science fiction books, began with seeing pictures in my head ….The Lion began with a picture of a Faun carrying an umbrella and parcels in a snowy wood.”

How magical to carry such an image in one’s mind and deliver it to readers through printed words! If you are a visual thinker, you might wonder what aphants get from speculative fiction.

In short: thoughts and feelings. It’s no coincidence that, in his book Reasons and Persons, philosopher and aphant Derek Parfit used a science fiction narrative to think through his philosophy of the self. (His teleportation story explores the death of the self in one location, while an identical self appears on Mars.) Speculative fiction helps people speculate.

For me, “picturing” a setting is more of a feeling rather than actually seeing it. When an author does a particularly good job of creating atmosphere, I can feel it. I just can’t see it. That’s probably why I prefer fantasy books so much more than contemporary—the worlds are so much more incredible and easier to “feel!”

“Atmosphere” is a great word, because atmosphere isn’t something anyone visualizes (or do they?!), yet everyone perceives its distinct character.

Language’s musicality generates this atmosphere. As a child, I listened, enraptured, to my Narnia cassette tapes. Lewis’s words, Sir Michael Hordern’s voice, and the flute and harp accompaniment: these three varieties of complementary music conveyed emotion … and even motion. The gravitational orbit of individual sentences pulled me into deeply realized worlds, almost close enough to touch.

I have two suggestions for writers seeking to reach readers with aphantasia. First, use the setting description on an as-needed basis. When a new landscape or cityscape is described in a page-length sketch, I have nothing to graph the data onto (whereas if you describe someone’s eyes, I know where they belong on a face). I digest sensory information best when it is delivered like breadcrumbs, one situated detail at a time. When Narnia’s Lucy encounters the wardrobe, then the lamppost, then the Faun, I can process the settings with the help of these focalizers.

Second, I know you’re supposed to “show, not tell” and not baldly say how characters feel, but sometimes it helps! Since I can’t process in-depth descriptions, I’m sometimes unsure how to feel–is this place ominous? Lonely? Guiding commentary and character reactions to the setting allow me to focus on one portion of the description, and not worry about other details; these devices also give me a sense of the emotion involved. Often I know I’m missing details, but by feeling the emotional stakes of a scene and grasping the barest atmosphere of its landscape, I’m hooked and trust I’ll catch up as the adventure unfolds. I’ll go anywhere, even in the dark, if I feel for the characters. 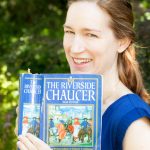 Kim Zarins is the author of Sometimes We Tell the Truth, a YA contemporary retelling of Chaucer’s Canterbury Tales, in which high school seniors ride a bus to Washington DC and tell stories to pass the time and maybe reveal something about themselves. You can reach Kim on Twitter @KimZarins or through her website, www.kimzarins.com.