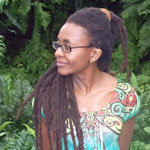 Nnedi Okorafor is the award-winning author of the young adult novels Zahrah the Windseeker, The Shadow Speaker, and the just-released Akata Witch, and her short fiction has appeared in Strange Horizons, Writers of the Future, Lightspeed, Clarkesworld, and the anthologies So Long Been Dreaming, Seeds of Change, Eclipse Three, Way of the Wizard, and Life on Mars, but it is her adult debut novel, Who Fears Death, which has garnered her first Nebula Award nomination. As does much of her fiction, Who Fears Death features a strong West African heroine — no strange territory for Okorafor, the Ohio-born daughter of Igbo Nigerian parents. It is her characters’ abilities to face and overcome their fears which empower them to take control of their destinies; it is her own ability to write without fear which brings these characters and their worlds to rich, vibrant life. A professor of creative writing at Chicago State  University, Okorafor will also be the Amazon.com visiting writer at this summer’s Shared Worlds teen writing camp.

When you finished Who Fears Death what was your greatest fear about the book?

When I finished Who Fears Death, I knew I had written a hell of a novel and I wanted other people to read it. The “Oh-my-God-what-have-I-done?” feeling came just before publication. My greatest fear was that I was going to really piss off a lot of people. The novel takes on some heavy issues and it’s unapologetic and unflinching. It’s not a novel that tries to be prim and proper. It’s not polite. It doesn’t beat around the bush. And yes, it’s full of anger. My own anger. But there is great love in the novel, too, so I held on to that fact to assuage my fears.

Also, I feared that readers would get so caught up in trying to locate what was familiar or positioning the book in some tradition or slapping it with some label, that other aspects of the book would be ignored. I don’t know what the obsession is with needing to label things but it’s a practice that rarely serves me well.

Onyesonwu faces racism from both sides; she faces sexism from multiple male-dominated fronts; she faces loneliness and love and loss; and she faces her death, its manner but not time known to her for much of the book. Would you want to know the manner of your death ahead of time? How do you think it would change you? How do you see it as having changed Onyesonwu?

I wouldn’t want to know. I believe some things are written. Some. Knowing would only cause me to fixate on the inevitable as opposed to focusing on what it is that I was put here to do. How do I think knowing affected Onyesonwu? In her case, it liberated her to follow her instincts. But that was because she was already in a rather intense situation.

Sexism and racism, particularly ethnicism, play a part in much of your fiction, and your fiction has been recognized and awarded for its treatment of these themes and issues. Do these themes come from placing your characters in a realistic world where such struggles exist, or do the themes come first, and the characters are those which fit what you are trying to say?

My characters always come first. You can’t have a plot if you don’t know who is going to move through it. Onyesonwu came to me way before her story did. The first scene I wrote was the first scene of the novel. No outline, no nothing. Just Onyesonwu at her father’s burial and some madness happens. The themes and issues came organically as I wove her story. I had no clue that I would write this type of novel until I wrote it.

As far as the realism, that is something you’ll always find in what I write. In Who Fears Death, the Golden Rule of sorcerers is to, “let the eagle and the hawk perch” That’s a central belief in Igbo (Nigerian) traditional spirituality and I deeply believe in it. The phrase can mean, “live and let live.”Or it can mean, “Let all spiritualities/religions coexist” It can mean, “Let the mundane world exist with the spiritual realm.”Realism and fantasy coexist in my world and in my stories.

You’ve written that you “closed your eyes”to keep fear and doubt away while writing Who Fears Death, not letting yourself second-guess what felt true to the story and characters and world you were inhabiting. Have things changed for you since you finished the novel, as if you’ve “broken through”some kind of barrier? In other words, do you see yourself as more able to consciously write such characters and conflicts now that you can look back on such a process?

If anything, it’s scarier because now I know what it feels like to come up against the resistance I feared. Now I know what it’s like to receive hate mail (multiple times) for addressing a political issue. It was jarring, scary and infuriating. When I wrote Who Fears Death, I was naïve (and I’m glad I was). It didn’t really cross my mind until the book was out! Now I go into things with fully opened eyes. I am aware that I can evoke strong reactions. Of course, the fear I often feel now won’t stop me from writing what I must write. Wait until you see what I write next.

Your fourth novel, Akata Witch, was recently released to great reviews from the LA Times, Locus, and Publishers Weekly. What has changed the most about your writing since you published your first novel, Zahrah the Windseeker, in 2005?

I now know that I can get away with writing about a giant sand worm obsessed with the number 8, a tall naked Igbo man who can walk through walls and exploding flesh-balls full of hair and teeth. When I wrote Zahrah the Windseeker, I honestly thought people would dismiss me as nuts. Well, maybe some do but that’s beside the point.

What will an adult reader who discovers you via Who Fears Death find in Akata Witch and your previous young adult novels? Other than graphical content, how do you approach a young adult book differently, or is that distinction something which comes after the novel is written?

As for graphic content, actually, there is some in the YA novels. For example, The Shadow Speaker starts with Ejii witnessing the beheading of her father. The main differences are in point of view. Though much of Onyesonwu’s story happens when she is a young, she is telling the story as an adult who has seem much.

In addition to your novels, you’ve had an excellent run of short stories. “The Book of the Phoenix”appeared in the March issue of Clarkesworld, a story which you’ve described as “closely linked”to Who Fears Death, and which you wrote as part of creating a backstory for The Great Book which appears in the novel. Certain details fit perfectly (“men who eat glass and can walk through walls” but others you’ve said “surprised”you. What surprised you when you revisited the world of Who Fears Death?

Who Fears Death has been optioned for a film with Kenyan director Wanuri Kahiu directing and writing the screenplay. She’s been asking me a lot of questions. She especially wanted to know more about the origin of the Great Book in Who Fears Death, the mythology of the Ewu-born and other details in the Great Book.

The short story, “The Book of Phoenix”was one of three short pieces I wrote for her. After I wrote it, I sat back and thought, “No one would publish this. It’s crazy.”There is a lot of metaphor. It’s a story within a story within a story and it’s been manipulated over time (as I believe the stories in the Bible were). Therefore, there were jumps in logic, authorial heavy-handedness, odd manifestations, links to history- all these things were intentional. I wasn’t sure if readers would get all this.

What surprised me most was how easily writing this back story came to me. People have asked me if I’d ever return to Onyesonwu’s world. I didn’t like the idea. Writing Who Fears Death probably took years from my life …or at least several days, heh. And I rarely write direct sequels. Too many stories to tell. But when I sat down to flesh out these additional stories, they came easily, dare I say hungrily.

Your recent personal essay “Proprioception”is, well, very personal, providing insights into your fiction and also detailing your battle with scoliosis, spinal surgery, and how you dealt with (and continue to deal with) both learning how to walk again and the “personal apocalypse”of the loss of your physical abilities. How do you get from there to healing and empowerment, not just in fiction but in life?

You push forward no matter what. You imagine what can be and then make it happen. The doctors at the time did NOT know if I would ever walk again. Heck, they didn’t even understand what had happened. But my family NEVER doubted I would walk again and they acted accordingly and that attitude bled right into me. That experience strengthened my belief in the power of belief (and the cold hand of fate …but that’s another conversation). And the success I experienced (first I could twitch a toe, then a foot, then bend a leg, then sit up, then stand with help, then stand by holding myself up, then stand with a cane, then walk without one, etc.), all that was proof that one can accomplish great things but it is difficult and gradual.

As a professor of creative writing at Chicago State, you have ample opportunity to reach and teach young minds about craft, form, story, character, on and on. Who are some of the people that have had the most lasting impact on your writing, and what made them great teachers?

I am a product of university writing programs. I earned my BA in Rhetoric (Creative Writing), my MA in journalism, my MA in Literature and my PhD in Literature (emphasis Creative Writing). I am also a product of the Clarion Writing Workshop. I’ve had many writing teachers who have encouraged and taught me valuable essential lessons, some who spat on speculative fiction, some who wrote it. The list would be really long.

You have also been announced as the Amazon.com visiting writer for this summer’s Shared Worlds teen writing camp at Wofford. What do you hope to share with these aspiring fantasy and science fiction writers?

I hope to share my experiences, my methods and my stories.

What feels more personal: reading your fiction to an audience, teaching writing to a classroom of students, or workshopping a story with fellow writers?

You’ve received several literary awards (Wole Soyinka Prize for Literature in Africa, Carl Brandon Parallax Award, Tiptree Honor List), and have been nominated for many others, including the SFWA-presented Andre Norton Award for Young Adult Science Fiction and Fantasy. Where does a Nebula Award nomination fit into this landscape for you, coming as it does from your fellow authors in the field?

In many ways, I still feel like an outsider in the field of science fiction and fantasy. I am proud to simply be nominated. It’s a nod to the fact that maybe I’m not as outside as I feel.

Nnedi Okorafor will be at Barbara’s Bookstore in Chicago’s Old Town this Tuesday (May 10, 2011) from 5:30 to 6:30 PM as part of a Diversity in Young Adult Fiction signing. 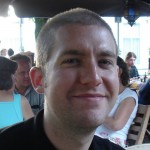 Samuel Montgomery-Blinn is the editor and publisher of Bull Spec, a quarterly magazine of speculative fiction.