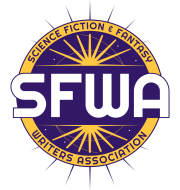 Writers who help create narratives for video games, table-top roleplaying games and card games will be eligible to be admitted to the Science Fiction & Fantasy Writers of America (SFWA) following a membership-wide vote. SFWA will start accepting applications for this Active-level type of membership on August 1st, 2016.

“I’m proud to be leading an organization acknowledging the wide range of forms genre writing can take,” said SFWA President Cat Rambo. “I’m also looking forward to the expertise and experience such writers can bring to the organization. “

Games in any medium may be used for qualification so long as the game has a narrative element, is in English, and in the science fiction, fantasy, horror or related genres.

Prospective members working on games may qualify by showing a sale or income in one of three ways:

Note that money from crowd-funding campaigns can be used as part or all of the required income once the game has been delivered to backers, but the amount that can be claimed cannot be more than the net income from the number of games produced and delivered to backers (calculated by the number of backers multiplied by the minimum tier which receives a copy of the game.) Work done for salary is not eligible.

For membership questions not answered above, please contact Kate Baker, SFWA Director of Operations, at operations@sfwa.org.

Since its inception, SFWA® has grown in numbers and influence until it is now widely recognized as one of the most effective non-profit writers’ organizations in existence, boasting a membership of approximately 1800 science fiction and fantasy writers as well as artists, editors and allied professionals. Each year the organization presents the prestigious Nebula Awards® for the year’s best literary and dramatic works of speculative fiction.